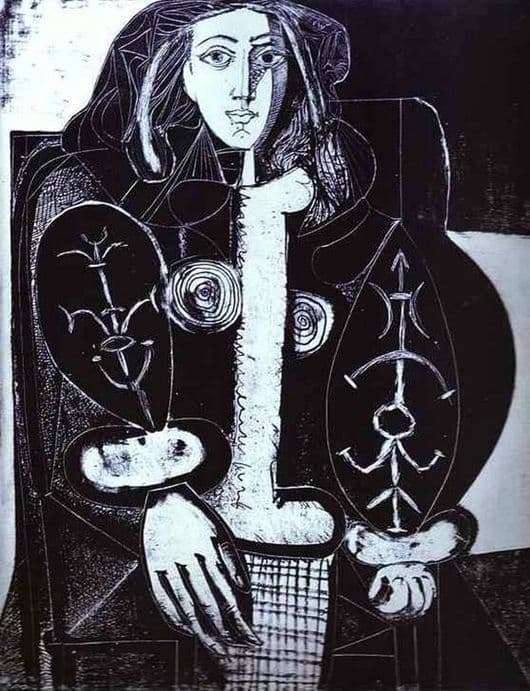 Like most of the paintings of the famous Spanish artist, this one is written in the style of cubism. However, it is worth noting that fragmentation into geometric shapes is not so traced as in other works. Of course, this portrait cannot be called clear and structural, depicting a feminine and beautiful figure. But still, the author highlights some details and draws them more carefully and naturally than others.

For example, in the foreground, you can see the hand of a woman with long thin and beautiful fingers. Emphasis on the aristocracy and beauty of the character depicted. Another important emphasis is placed on the face of a woman. Beautiful, inspired face with perfectly regular, smooth and strict features. An artist with a geometric approach based on the writing of this person.

A straight nose seems to be divided along an invisible line, in relation to which the two halves are perfectly similar. The same can be seen in the eyes and lips of a woman. Beautifully curved and clearly defined eyebrows, contours of the lips, eyelids and chin – all these features are so harmoniously combined, combined and correct in form, that one can only wonder at the skill of the artist.

A woman’s hair is shown not in curls, but as if by threads woven into a common fancy geometric pattern. And this pattern echoes the figures on the character’s dress, which are also shown in fancy bends by the artist. The background behind the female figure in the chair resembles a chessboard, as represented by large black and white squares.

The picture was made by lithography technique, so it is not necessary to judge the brightness of colors. However, the combination of black, white, gray and pale purple still does not make it painful and gloomy. Even despite such a range, it leaves the impression of completeness, wholeness and completeness of the plot.