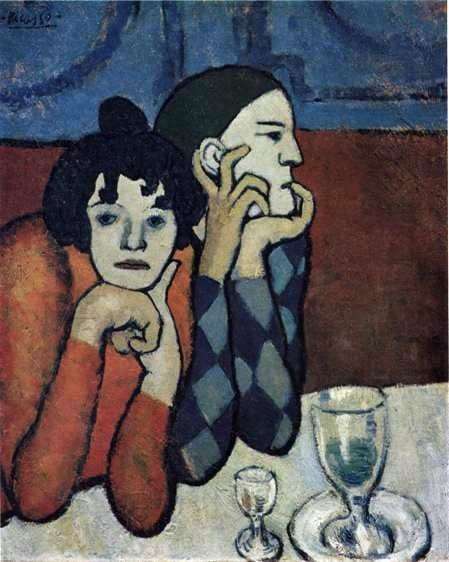 A characteristic feature of the work of Pablo Picasso, at the beginning of the last century, was pessimism. The artist was not left with heavy philosophical thoughts about the meaning of his own existence, about the attitude of the audience to his works and about his place in the history of world painting. All these sad thoughts are reflected in the works of Picasso, made during that creative period of his life.

Picasso often visited Parisian cafes. Such places were known as a kind of stock exchange where artists, mimes and acrobats could sometimes find an employer.

The canvas depicts artists sitting at a table in a similar institution. The harlequin’s look expresses attention, mixed with impatience. In the hope that today it will turn out to find at least some kind of work, he looks at the visitors of the cafe. He is very tense, this is indicated by the fact that he bites his fingernails on one hand, and the other pulls his ear.

Looking at his girlfriend, it becomes clear that the girl, in deep thought, absently goes through her thoughts. With an absent look and a sad expression on her face, she does not try to entertain herself with any hopes.

Both young men are exhausted by the hard life that has befallen stray artists. The audience is transferred their mood and sympathy for their difficult fate.

The idea of ​​the author to describe in this picture is not only a creative union, but also to emphasize the difference in views on life between a man and a woman. The man here is depicted energetic, ready to find a way to make a living. A woman puts care of herself on her companion, and she prefers to remain in a passive dreamy state.

The dominant presence in the composition of the blue color adds to the mood of sadness and easy apathy. The author decided to dilute the color gamut with red tones, symbolizing hope and the desire to achieve more successful times.