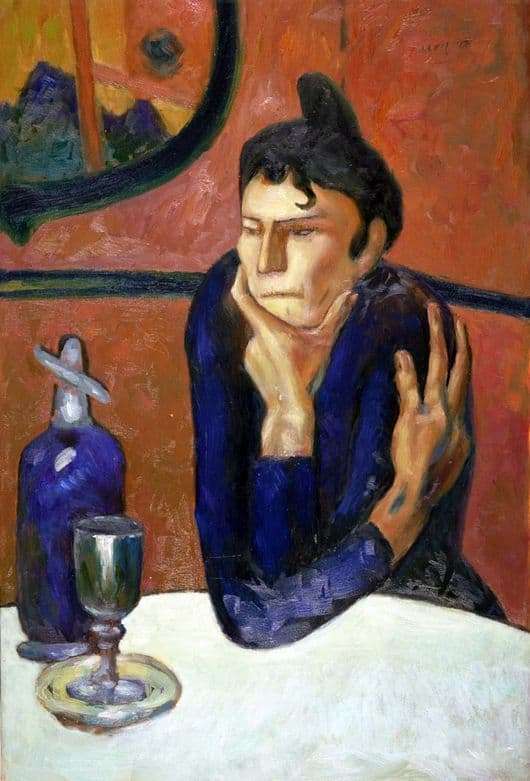 “Absinthe lover” of the genius Pablo Picasso was presented to the audience in 1901. I must say that this was not the first picture depicting absinthe – a drink so popular among Parisian bohemians of the time. Young Picasso, in a sense, paid tribute to the then fashion, dedicating one of his creations to him.

In the picture we see a typical plot for that period – a lonely person in a cafe. In the case of Picasso, this tired woman who drinks absinthe. As you know, he is famous for his ability to immerse people in a world of fantasy and hallucinations. The latter, by the way, explains his popularity with creative individuals. Wormwood was a kind of muse of many artists and writers of that time. Therefore, it is possible that the heroine of the picture is also a man of art.

The impression of the picture can be quite painful, because The scene depicted is dramatic. The doomed look of a woman expresses an extreme degree of loneliness and even abandonment. This is also hinted at by an overly large right hand – as if the lady is trying to embrace and protect herself from something. Or, perhaps, dissociate himself from the people and the whole world. One can understand from the face that a woman is deeply immersed in her thoughts and is somewhere far outside this cafe.

However, the viewer may get the feeling that the heroine’s gaze is directly on him, as if she is studying and trying to unravel it. There is a kind of smile on a woman’s lips, but this smile is not joyful, but rather sarcastic. The woman’s face is angular, the look gloomy and devastated. Her body froze in its immobility, even as if turned to stone. And at the same time, the figure gives a feeling of nervousness and tension.

“Absinthe lover” is a canvas of an incredible degree of color. Such contrasting colors were chosen by the artist not by chance. They are designed to emphasize the contrast of human life and its circumstances. The paints radiate, on the one hand, external calmness, and on the other, they speak of an internal struggle taking place in the soul of the heroine. Behind the corner is visible, which delineates the dark stripe. Perhaps it symbolizes the life’s dead end in which this unfortunate woman finds herself.