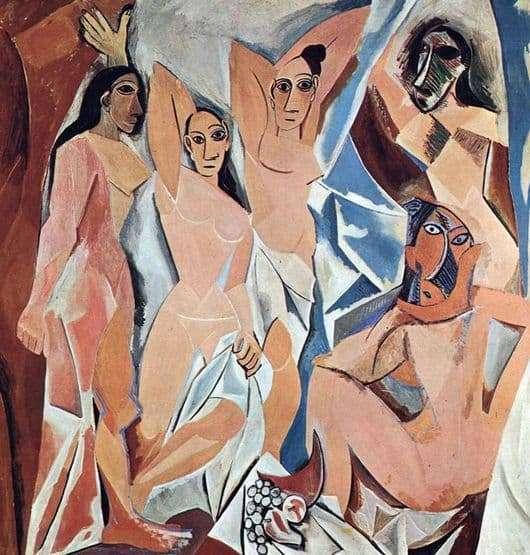 The very picture of the famous Spanish painter and sculptor Pablo Picasso called “Avignon maidens” came about on the basis of his impressions of the brothel girls located in the Avignon quarter in Barcelona (Spain). It should immediately be said that the original version of the picture was completely different, that is, it depicted sailors and another medical student who was holding a skull in their hands, who were sitting near prostitutes. The skull meant death, and prostitutes sex according to the artist’s plan. However, the idea soon underwent a change, and Picasso left only five “priestesses of love” in the picture, who were facing only half of the curtain. Also in the picture is a small still life of fruit, placed at the bottom of the canvas.

The picture was painted by Picasso at the beginning of the last century, that is, in 1907, and the very essence of the style in which it was executed means nothing more than a psychological challenge. And all because the people depicted in the picture have rather sharp forms, more resembling a certain hedge than real people. This is the corporate style of Picasso, who brought him worldwide fame.

The process of creating this picture can be divided into two stages, each of which has its own characteristics. And the first of them was, in fact, the most productive, because it was during him that the artist was able to depict the three central figures of girls of easy virtue, with the exception of the woman’s head on the left. In this picture, Picasso despises all the rules of the foundations of the art of the Renaissance, because it specifically depicts the knees and chest of girls angular, and pays special attention to the noses and heavy chins. Experts say that it was this work that became the harbinger of a new genre of art, namely cubism.