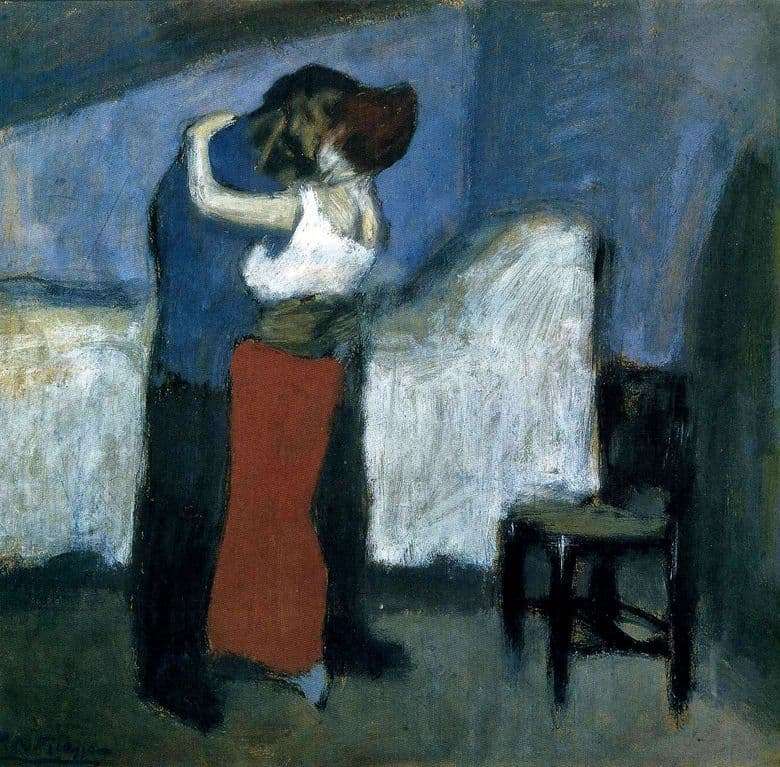 “Date” is a picture in which reflects all the necessary feelings between a man and a woman. She is fraught with the enigma of embraces, the sacraments of which Pablo Picasso will use for a long time in all subsequent works: the line of one figure smoothly flows into another, the volumes merge, and only the color of clothing can separate them. The artist presents many new couples to the world – from simple vagrants to lovers, where they all also merge into the reciprocity of their feelings – this becomes his leitmotif throughout his career.

It would seem that everything is simple in the “Date” canvas: bare walls, a chair, a bed, a man and a woman, hugs – and the outcome of events seems to be understandable, but these hugs are not simple. They seem to show that there is some kind of desperate tension between them – a farewell hug. Something must happen, like the heroes of the Remark books, and there is very little time left.

Picasso knew how to betray the idea of ​​these embraces with simple colors and absolutely simple lines – no faces are visible, we don’t look at them, nevertheless we become witnesses of a very important scene. One feels the transience and insignificance of life, something happens behind the walls of this attic, but Picasso does not say that by allowing everyone to present their own version of events. For example, the poet of the Soviet period – V. Kornilov saw in the “Date” resistance to the regime of Stalin, and not to those in love.

The author of the canvas did not conceive it as a love or protest. Picasso painted a picture in 1900, when time was relatively calm, and the scene depicted a scene in a brothel in Barcelona, ​​he later wrote a couple of pictures of this subject.