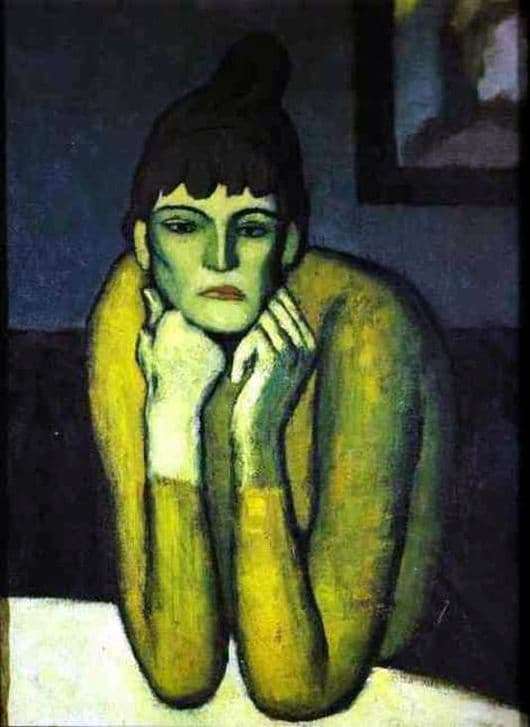 Pablo Picasso finished this painting in 1901 during his second trip to Paris. At the time of painting the artist turned 19 years old. It was a difficult time for the artist. Despite his young age, Picasso already knew the bitterness of loss. Shortly before, he had tragically lost his close friend, Carlos Casagemas. He was also an artist and committed suicide. Pablo grieved the death of a loved one. But on the other hand, it was this painful event that triggered a new round of the artist’s creativity. Picasso finally finds his own unique style. Before that, the artist studied under other masters and tried to imitate them.

Later, historians of painting would call the time from 1901 to 1905 the “blue” period in the work of Pablo Picasso. And the picture “Woman with Chignon” became one of the first truly original works of the master. In the center of the composition is the figure of a young woman. She sits, leaning her elbows on the surface of the table. In the pose of the model visible anxiety and tension. Hands woman put in front of her, and shoulders slightly pushed forward. It seems that she is trying to isolate herself, to defend herself. The eyes under the elegant semi-circles of the eyebrows are filled with sadness and grief. The corners of the lips mournfully lowered. The face is beautiful, the lines of the cheekbones are clearly traced. But the face is devoid of symmetry, canted, as if from some kind of heartache and suffering.

In the composition of the picture there are no extra details. The surface of the canvas is divided horizontally into three parts – a pale yellow table, a graphite surface of the sofa and a gray-blue wall space. The space in the background limits the picture, the edge of which is lost outside the artistic canvas.

The lines of the pattern are mean, sharp, smooth. The range is dominated by gray tones. Later, they will be replaced by various shades of blue and blue, which will give the name to the entire Picasso creative period. The only bright spot is the woman’s mustard yellow blouse. But this color is not capable of adding a picture of light and vitality, it only contributes to the overall impression of anxiety and hopelessness that remains from the picture.