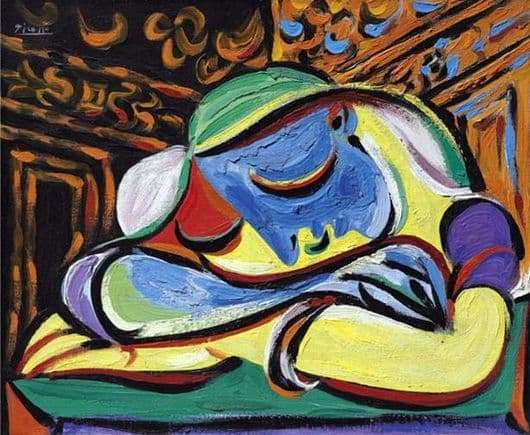 One of the famous works of the period of surrealism by Pablo Picasso, is a portrait of “Sleeping Girl” in 1935. The painting depicts Maria Theresa Walter – the model, muse and mistress of the famous Spanish artist.

Picasso met Maria when she was 17 years old, at that time she was already married to Russian ballerina Olga Khokhlova, and their son was 5 years old. The marriage of the artist, as well as the minority of Mary, were the main reasons due to which the artist for a long time hid his romance. But Picasso didn’t succeed in concealing his novel in his work, for the fact with what tenderness and love Maria was depicted in the paintings could not go unnoticed. This woman seriously influenced the work of the Spanish genius.

“Sleeping Girl” is a picture that relates to the whole cycle of works depicting a young artist’s mistress, looking at this artist’s work, one feels the warmth and tenderness of a woman’s sleep or half-dream. These emotions are so clearly conveyed that sometimes the spectators, in fear of waking up the beautiful Mary, even speak in a whisper. The idea of ​​a sleepy, dreamy and loving woman, is repeated many times in the works of Picasso.

Maria also often posed nude and judging by these pictures, she was more likely the object of the artist’s lust, passion, but not equal love.

After Maria’s daughter was born to Maria, the artist’s wife became aware of his infidelities and she immediately took her son and left. Later, Picasso had another lover, Dora Maar, once, the lovers were confronted in his workshop, and there was even a fight between them, he called this moment one of the most vivid memories in his life. Maria Theresa Walter until the last days of Picasso maintained a relationship with him and dreamed of marrying him, but this did not happen. 4 years after the artist’s death, she hanged herself in her garage.

In 2011, the painting “Sleeping Girl” went under the hammer of Christie’s auction for a space $ 21.9 million, the buyer of the world masterpiece wished to remain anonymous.