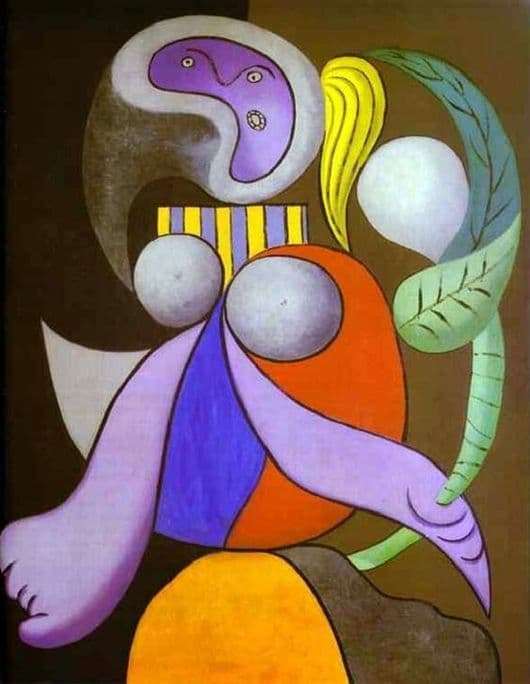 This picture is unlikely to be perceived by the audience unequivocally. Abstraction – it is invented to simply cause a certain impression in a person. Someone on this canvas and does not see a woman at all, only a set of geometric shapes, and of course the leaves – at best.

But there is, is on it, albeit very sketchy, but still facial features. It is harsh and angry, and therefore must be contrasted with the flower. Why women give flowers? To once again emphasize the natural beauty of those and others. Flowers should have a person to positive emotions, and here there is – dissonance, conflict. And the flower itself is more like a large pebble or a balloon than a plant.

There is a movement in the picture – these are purple hands and a three-colored cape creates it. But what exactly I wanted to say with this canvas by Pablo Picasso is not entirely clear.

Most likely, to show some female emotion seen by him. And it is quite possible that an angry woman with something that considered the flower presented to her to be something blasphemous. From there, probably, this resemblance to the cobblestone of the flower itself, from there, and an indignant grimace.

Pablo Picasso, we know a diverse artist. He also has quite realistic paintings, for example, portraits of his wife, his muse and inspirer Olga, who was a famous ballet diva. But there are also purely abstract paintings, which for some reason are more used to associate the name of the artist.

It is possible that they appeared as a result of the spirit of the times that they wrote to order. And if now remember about this picture, it means that it is appreciated that art critics find in it some kind of harmony. We, ordinary viewers, can see only emotion in it. And since the form here is actually destroyed, it is replaced by something else, it is just a picture-feeling.