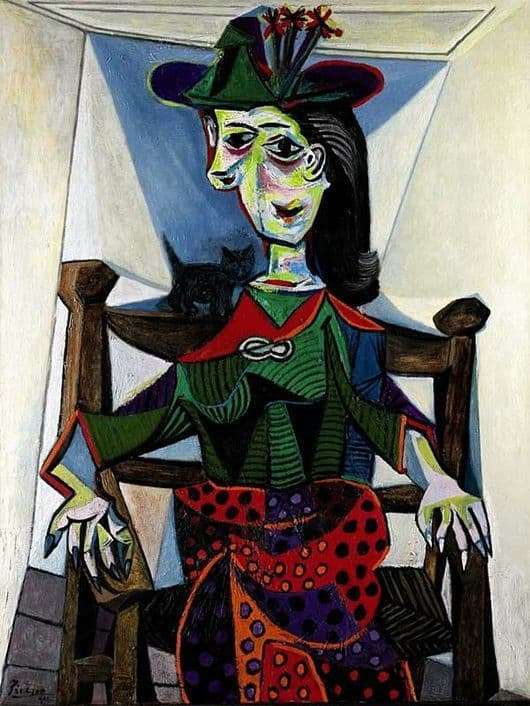 Dona Maar was the lover, faithful companion of life and friend of Pablo Picasso. This was a beautiful, mysterious woman. The reason that she depicts all the canvases of Picasso Don is extremely creepy, was the period in which the relationship of this woman and the great artist unfolded. World War affected all spheres of life of each person. Not spared it and the work of the Spanish master brush. Union Dona Maar and Pablo Picasso can not be called romantic, sentimental. It would be more correct to say that their relationship was an organization of two minds, intellectuals, artists.

It is no secret that when two people with a strong character come together, their relationship is more a struggle between two extraordinary personalities. Perhaps, precisely because of this fact, Picasso painted the beautiful Dora very distorted, giving it sharp corners and dark shades.

Characteristic objects for Maar on Picasso’s canvases were caps and long, sharp nails. The hat emphasized the involvement of women in the surrealist movement. In life, these details of appearance were important enough for a woman, perhaps, therefore, Picasso emphasized them in his works.

In the portrait “Dora Maar with a cat”, the sharpness of the nails is emphasized by the presence of a small black cat. The nails depicted in the picture are the symbol of unbridled feline nails. The blue nails painted by Maar are a symbol of the possession of power, violence. Pablo Picasso has repeatedly stated that he compared the character of Dora Maar with the temperament of an Afghan cat. The artist resorted to cubic methods of drawing. Thus, he reworked the beautiful, subtle, oval face of Dora’s beloved into an unrecognizable and deformed caricature. The woman’s ear in the image is located under the eye, her mouth twisted in a smile. And the face itself is presented simultaneously from two sides: frontal and profile.

Behind the woman is a cat. Her position is also quite uncertain. On the one hand, the animal is quite cute and funny, but the color of the cat emphasizes the awesome notes of the piece. The combination of a woman and a cat was represented by Pablo Picasso as a combination of endless sexual aggression and cunning typical of the fair sex. It is certain that the black cat is a symbol of the hot, fiery personality of Dora Maar and the very relationship between the two artists. Thus, the interweaving of the most diverse emotions of Picasso poured on the canvas “Dora Maar with the Cat”, which is the proud property of the box of world art today.