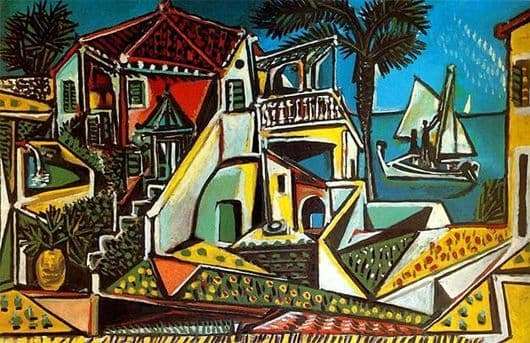 The picture was painted by Picasso in the postwar period. The Mediterranean landscape on the seashore is not a serene idyll. The researchers of his biography and creativity believe that the broken forms in the picture show tension and anxiety.

This is due to the fact that during this period of life the artist deeply worried about the break in relations with one of his lovers, Françoise Gilot.

At that time they had two children, but after a year the couple in love broke up. Beloved showed herself as a pretty strong woman, and she left Picasso. He was worried about this, his parting deeply affected.

Although Picasso himself often went to the side, Francoise liked him and he did not want to break off relations with her, therefore her departure deeply stunned him

The villa on the Mediterranean coast appears to us on a plane as if unfolded, in section – the inner courtyards, stairs, gardens and flower beds seem piled on top of each other, the perspective is broken.

But the penumbra, solid, broken black lines – are shown quite clearly, the colors are bright and saturated, but all is bordered by a black rough outline. Picasso’s recognizable style, vivid manner of abstract cubism, geometric image.