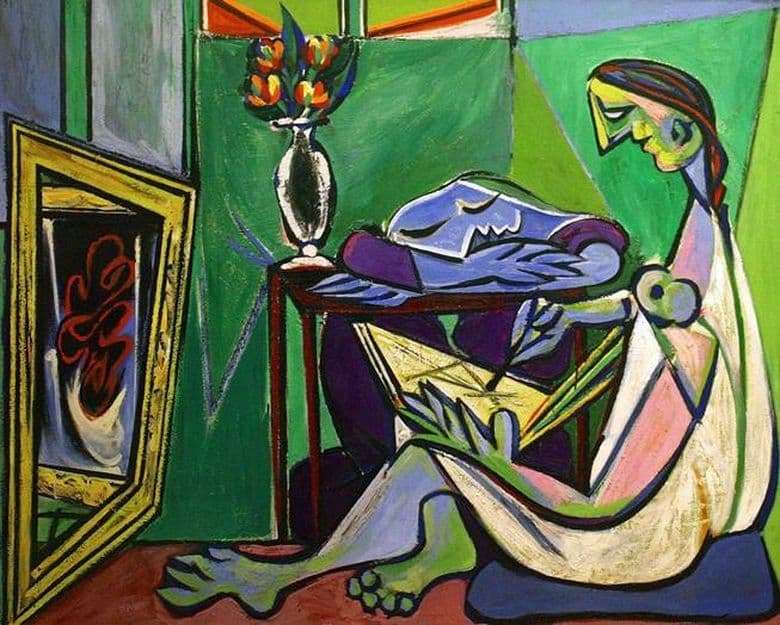 Written in oil in 1935, dimensions: 130 by 162 cm. Located in the Center Pompidou (National Center for Art and Culture Georges Pompidou), Paris, France.

Creativity of this famous artist can be divided into several specific stages. This picture refers to the period of surrealism of 1927-1936, which contains reality, paradoxes and fiction. Then the artist became interested in the young Maria Theresa Walter, whom he met on a Parisian street and persuaded to pose, only when he showed a book about his art. Subsequently, she will give him a daughter.

The characteristic features of most of the works of that time are the tense, shapeless and somewhat frightening images created under the influence of the works of surrealist poets and mental tension associated with conflicting feelings for his wife and young mistress. In this creation, the trend of cubism is also seen – in an effort to draw an object in simple forms and different projections at the same time.

Maria is depicted on a nude canvas with a yellow album and a pencil drawing a reflection, while she seems no longer so tender and beautiful, her warm glow fading as if gradually. The second woman is dressed, she sleeps with her head on her hands, and is very similar to the first, but more calm and soft. Probably, this is how the master portrayed Maya, who was born out of wedlock in the year of the painting. Red and black in the mirrored faces a bit like the third, not yet fully embodied from non-existence and probabilities lady, who soon breaks into the life of the master – Douro Maar.

Color solutions (green, terracotta, mauve, light yellow, brownish blue…) and the neighborhood of rounded and acute-angled forms cause a strong emotional response to the contrast, and the general feeling of a slowly and steadily thickening atmosphere, along with sympathy for a fading light girl.