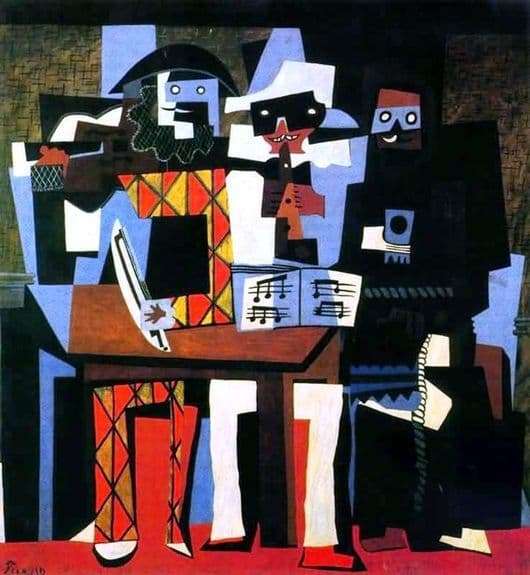 This work, written by Picasso in the style of synthetic cubism, was created by him in Fontainebleau in the summer of 1921. It is believed that she portrays the deceased Guillaume Apollinaire, Max Jacob and the artist himself. Apollinaire is depicted as Pierrot with a clarinet, Jacob is painted as a monk with an accordion, and Picasso appears before us as a Harlequin with a violin. Now the canvas hangs in the Philadelphia Art Museum.

The beginning of the twenties, despite the rapidly developing military events, became the most fruitful in the life of the author of the canvas. The artist was not subject to military conscription, so during this period he devoted himself entirely to creativity. The first years of World War brought him peace and inexhaustible creative inspiration. He plunged into work and in solitude experimented with shapes and color palettes.

The picture is realistic, but neoclassicism cannot be overlooked in it. The figures, as if modeled separately from each other, do not leave us feeling that they are individually glued to the canvas. Thanks to the style chosen by the author, the borders of the characters do not look tough. They are heavy, but the contours of their bodies seem to diverge in space, allowing you to see the volume, texture, mood and movement.

Traditional clownish attire in the style of “comedy del arte” for the main characters of his canvases famous Spanish artist spied in the troupe of the Roman theater. He tried to catch every smallest detail, which allowed him to convey the images of friends in his work as realistically as possible. He suffered from the limitations of the chosen style, which did not allow him to fully embody all the creative thoughts. That is why Picasso strives to modernize the established canons and add personality to them.