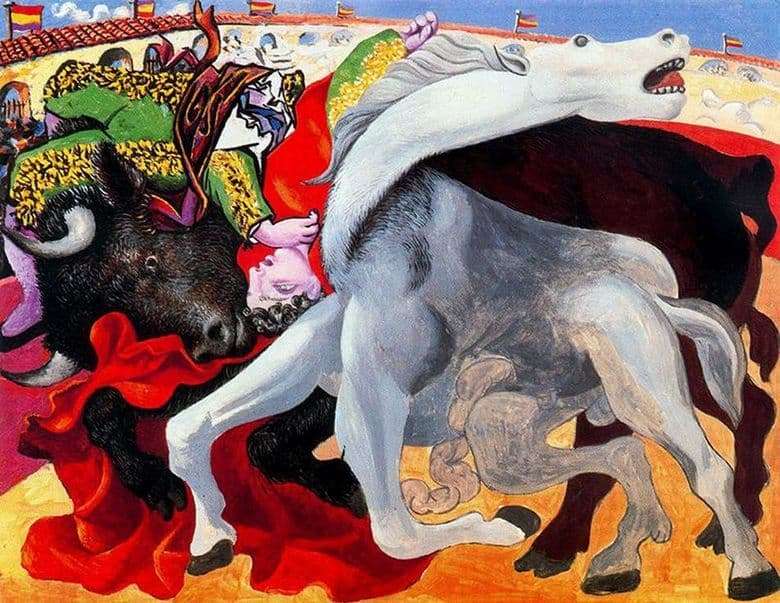 Corrida has been Pablo Picasso’s favorite spectacle since childhood. He regularly came to the arena, where he saw not only the victory of the bullfighter, but also their utter defeat. The artist many times depicted bullfighting in his paintings, but the most popular of them was “The Death of the Bullfighter”, written in the style of the author’s favorite surrealism in 1933.

In the painting “The Death of a Bullfighter”, the artist depicts at the same time a bull, which for him served as the personification of the masculine, and the horse – the feminine. If you look at the picture through the eyes of the author, then we see that in these images there is an eternal clash of the sexes, the struggle of a man with a woman.

Then a disturbing plot is revealed in front of us, in which a huge bull drags on its powerful horns a merciless bullfighter, anticipating his approaching doom. We see his face looking out from under a red piece of cloth in which Picasso left some kind of mystery. If the bullfighter can defeat his horny rival, it will be just his red cloak, if everything happens the other way around, having a sad outcome, this red spot means blood flowing from the body of a dying person. Judging by the name of the picture, it is necessary to lean closer to the second variant, however, knowing the unpredictability and originality of the artist’s thoughts, one can find another secret meaning of this action.

Pablo Picasso often depicted images of characters with a dual meaning. Even in the painting “Death of a bullfighter”, the bull is represented not only as a murderer, but also as a victim, like the man he defeated. If you look closely, then we see that not a wild rage is present on the face of the beast, but just an extraordinary surprise. The painting is imbued with the expression and motives of surrealism, which only true art lovers Pablo Picasso can fully understand.