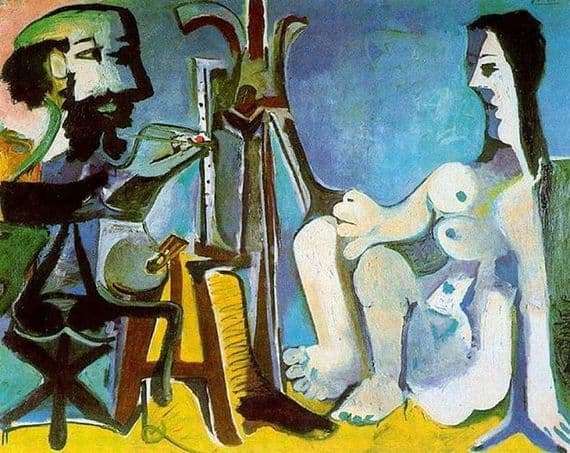 The canvas was created in 1926 in oil on canvas.

Picasso is considered one of the great artists of the 20th century. His canvases are estimated at millions of dollars. But not all his works are understandable for the perception of an ordinary person. Not prepared, they can plunge into shock. The whole life of Picasso is divided into life periods that influenced his perception of the world and people.

“Artist and Model” is one of the paintings of the cycle of paintings on this subject. It depicts an artist who paints a nude model on canvas. Picasso was repeatedly accused of misogyny for distorting figures and faces of women.

Perhaps this is due to his difficult relationship with his first wife, with whom he never established relations. On his canvases, he purposely disfigures the figure and face beyond recognition.

The picture from the cycle “Artist and Model” of 1926 was no exception to this rule. It refers to the period of life of Picasso called surrealism. This is one of the most difficult stages in life for an artist. He was often prone to hysteria and fear in his works.

Just during this period, an additional negative impact on the formation of images in the head of Picasso had a bad relationship with his wife. He threw out his aggression on the images of women in ugly forms.

The model is depicted with fancy fat fingers, on the hands and feet. They seemed to be swollen from an insect bite. But even more impressive is the breast of a woman. It has an incomprehensible shape and is not located in accordance with human anatomy. The skin has a white and blue color, as if the girl is not from our planet. Looking at the artist, it creates the impression of a split in the eyes.

The picture is both surprising and shocking, however, like all the works of Picasso. Although, nevertheless, there is in this cycle more adequate and similar to normal canvases. Understanding Picasso is very difficult.