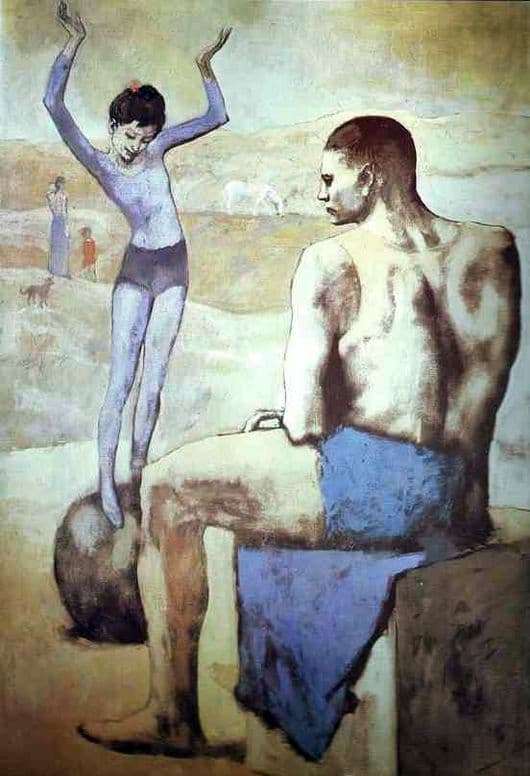 This is perhaps one of the most famous paintings of Picasso. The artist wrote his masterpiece in 1905. “The Girl on the Ball” marks a new period in the work of Pablo Picasso, which the researchers called “pink.” Artist’s canvases are becoming more cheerful and positive. The main characters of his paintings at this time are people of circus arts. It is worth noting that Picasso was not alone in choosing the subject. At the beginning of the century, many artists captured circus performers, feeling a kind of spiritual affinity with them.

On the canvas “The Girl on the Ball”, Picasso portrayed a wandering troupe of acrobats. In the center of the composition are two artists – a girl gymnast and a strongman. The child balances on the ball, rehearsing his number. The girl’s figure is gracefully curved; she raised her hands to maintain a delicate balance. The athlete sits still, his powerful body full of calm. Two artists contrast sharply with each other. On the one hand, the fragility and impetuosity of a thin girl on a ball, and on the other, the strength, power and static character of a man sitting on a cube.

The main expressive means of Picasso is still the line. But unlike the paintings of the “blue” period, here we see more and perspective. In the painting “Girl on the ball” is built with the help of several horizontal lines and small figures in the background (a woman with a child and a snow-white horse). Because of this, the picture does not look flat, it has a light and airy.

An image of a bare desert or steppe is selected as a background. This situation is not too consistent with the mood of the circus. Thus, the artist emphasizes that the life of these people does not consist only of fun, jubilation and applause of the audience. There is also need, grief, illness.

The color range chosen by the artist is also very characteristic. The blue color, so beloved by Picasso, remained only in the clothes of an athlete and a gymnast. And the rest of the picture is dominated by shades of pink.