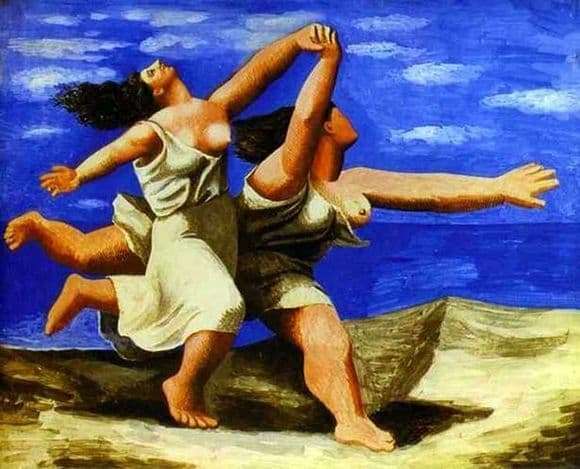 The work “Two women running along the beach” was written by P. Picasso while relaxing on the coast of the English Channel. The master at the time was married to Olga Khokhlova, became a father and was happy. This period of the artist’s work is imbued with realism, he was even accused of changing the style. The picture is written in the style of neoclassicism. It would seem that the real plot, two running women, but the image is transmitted through the prism of the artist’s understanding of their reality.

Not thin and light women of that time, running goddesses and ideals of beauty give in to a look. These are two ordinary plump women with scruffy arms and legs. The figures of the heroines of Picasso made disproportionate, somewhere even unnatural. Despite the large silhouettes, girls run easily, literally floating above the ground.

The picture is imbued with ease, flight. Reality is distorted, but not completely lost. Women look free, the wind develops hair, and the look of one heroine is directed towards the sky. She dreamily threw back her head, inspiration and satisfaction were read on her face. It creates a feeling of complete happiness and harmony.

Bare chest indicates the absence of tightness, frames and restrictions. The absolute expanse of being and free running. All attention is taken away by female figures, the artist made the background very simple. You can barely separate the sky from the sea surface. Floating clouds and the depth of heaven speaks of good weather, suitable for walks. The sea symbolizes infinity, like the run of heroines. Endless free run. Free run from complexes and prejudices, from the framework of life and social condemnation.

It is difficult to imagine at that time a real picture of women running like this. Most likely, it was P. Picasso’s fantasy, embodied through the understanding of his individual freedom. This embodiment of mental and physical flight is understandable not only to connoisseurs of painting, but also to ordinary people. This work is one of the most popular P. Picasso.