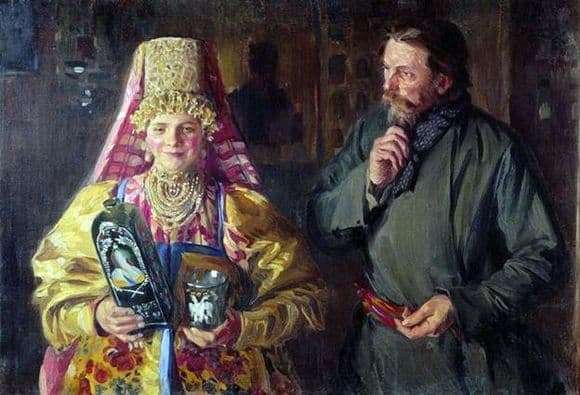 Ivan Kulikov – the famous artist, describing the real life of the Russian people. At first, his work was limited to scenes from the life of ordinary villagers. Then his paintings acquired a historical genre. He began to describe the idealized life of the boyars. In 1911, he created one of the most vivid paintings of this genus, entitled “Happy holiday! Zardela “written in oil. In his work Kulikov often depicted scenes from ancient wedding ceremonies.

In this picture, the viewer sees two actors – a young girl and an elderly man, perhaps her father, who are in the terem. By the side of the girl it becomes clear that she is getting married.

The artist Kulikov in exact detail recreated the wedding decoration of the bride of the times of ancient Russia. Her shirt is yellow with puffy sleeves, and traditionally she wears a sundress on top. The robe is embroidered with patterns of red flowers, and her head is crowned with a high kokoshnik. In Russia, the white color of the dress and veil was not a symbol of the wedding celebration.

The neck and the ears of the bride are decorated with massive jewels, each of which has a specific meaning. The cheeks of the girl will brighten, that is, they burn with a bright blush, possibly from excitement or restraint. In her hands, the bride holds a bottle of bread wine and a glass needed for the marriage ceremony. Most likely, the action takes place before the trip to the church.

On the face of an elderly man, standing next to the girl, reflects concentration and slight puzzling. He is dressed in a gray-green shirt, girded with a red sash. The face of the bride also shines with a happy and joyful expression.

The painter Ivan Kulikov depicted his heroes very vivid and alive. The spectator, looking at his picture, becomes clear not only their lifestyle, but also their moods and experiences.