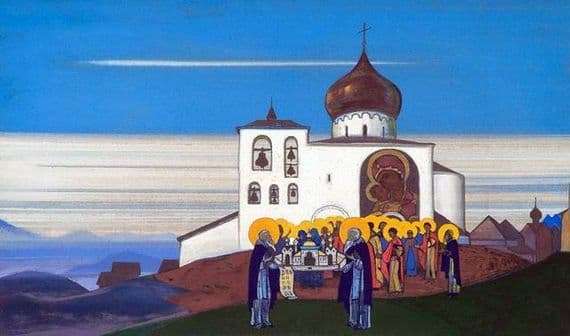 Roerich was a very versatile man – an artist, a writer, a traveler, an archaeologist, he lived a long life and wrote about 7,000 paintings, many of which are famous and are kept in museums.

“Zvenigorod” is a picture closely connected with his life and with his belief that Altai is the best place for a person, tall and clear, and that it is there that one can live a real life and build a city-utopia. Roerich had this dream for many years – he wrote about her in letters, he told his family about her. The Promised Land, a city where there will be no destitute and offended – the city of Zvenigorod, which will become a haven for people of art, science and religion.

In the picture stands a white temple with a single dome surmounted by a cross. In the windows of the bell-posts you can see the bells, on the wall – the icon of the Mother of God, and the saints come out of the doors of the temple.

Their heads are surrounded by the shining of halos, all of them are in long-faced clothes and with pacified faces. The first two carry the city under their golden domes in their arms – Zvenigorod, already conceived by them, which is left only to lower to the ground so that people can build it. This is at the same time the design, the resolution, and the command.

And behind the temple rise mountains – low, sinking in a blue haze. This is Altai and at the same time the sky, because where is it even closer to the sky than in the mountains? On the right you can see the city, and the heavens are poured over the heavenly temple with a shining azure, the purest color.

This picture embodies Roerich’s dream, his hope that one day Zvenigorod will exist. It resembles an icon, in its imitation of the canons of Orthodox iconography, in its colors shining with unearthly light, in its nimbus over the heads of saints and their faces.

This is a dream and at the same time a prayer. When you look at it with all your heart, you want this city to exist, and that the shining golden domes of churches stand above it. Because such a force, the desire not to divide is impossible.