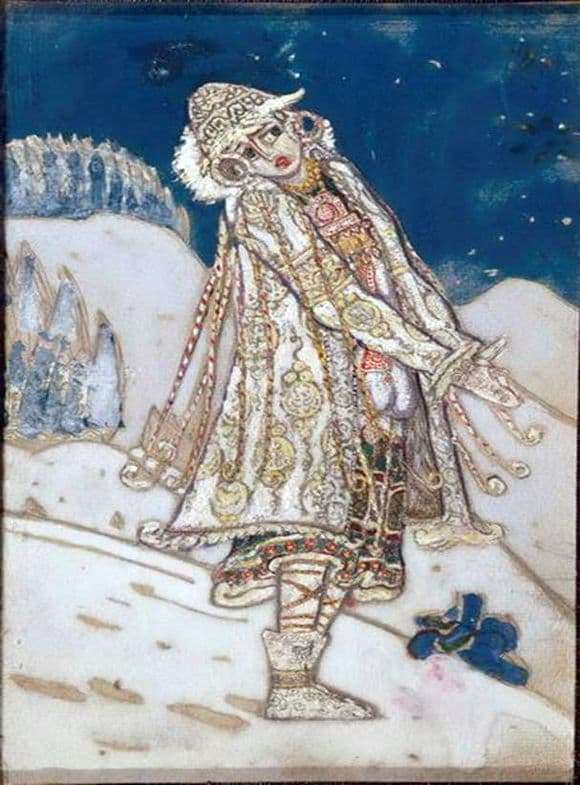 N. Roerich often made sketches for various productions, which were successfully held not only in Russia, but also abroad.

The artist approached the creation of scenery very responsibly and worked on each drawing for a long time. He believed that the viewer was studying his sketches in detail and even once wrote in the newspaper a refutation for the unsuccessful work of artisans on his masterpiece.

In 1920, the artist begins work on the design of a new production of Rimsky-Korsakov. This reading of the work “The Snow Maiden” was different from previous productions. We needed completely different characters and an innovative approach to the art of drama. More attention was paid to the influence of other states and peoples throughout Russia.

The artist in the way of the Snow Maiden showed that this character belongs to Russian folklore, antiquity and traditions. This girl seemed to come out of a fairy tale, of a completely different world, unlike the classic Russian myths. For that time, the image was just revolutionary and many even incomprehensible. The image resembles an old Russian icon.

Creating this work, the artist studied many folklore works, traditions and rituals. The performance was a fantastic success, and the elements of the heroine’s clothes became fashionable at the time.

Roerich created a new era and a completely original style. The costume of the girl is painted with mysterious circles and curls. This ornament resembles the coat of arms of Siberia. This image is not like anyone, bright and memorable. The Snow Maiden personifies the whole of Russia as a whole.

The artist fully embodied in the design all the ideas of Rimsky-Korsakov. Their views on the production were the same, and the worldview was the same. The performances were successfully held in many countries, and only then was the work submitted to the judgment of the Russian audience.

The new reading of the Snow Maiden has caused a great number of disagreements among critics and today causes much controversy.