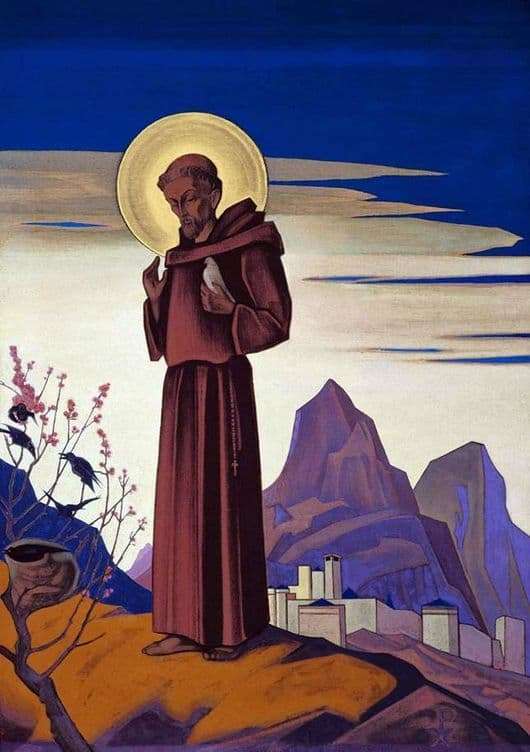 “St. Francis of Assisi” was written by N. K. Roerich in 1932. This is the most revered Italian saint, he was portrayed by many artists. So this eminent author decided to draw the universal saint the way he saw him.

Francis is depicted standing on a rock, below we see a city that whitens among the high mountains. Over the head of the hero of the canvas shines a halo, in the form of a halo. Sunlight symbolizes a connection with something heavenly and high. A man is dressed in a long savanna with a characteristic hood.

In his left hand he holds a bird, and this animal feels protected. His hands are a haven for the creatures of God. Goodness and mercy is enough for everyone. The main quality of this saint was non-judgment. He comprehended the love of all those around him, simply ceasing to condemn the actions of people. So great wisdom entered his life. His love was pure and not platonic in nature. Only monologues with the creator and endless prayers broke from his lips.

According to legend, he could even dissuade the wolf from being a cruel animal. He said that everyone has their choice. There is no weekend and difficult situations. Sometimes a person simply does not see the light at the end of a dark corridor, because he is looking completely in the wrong direction.

Roerich managed to paint with colors all the holiness of this man. He learned to think and understand how his hero canvases. Francis of Assisi proclaimed that forgiveness lies in understanding. Here only this supreme gift is given only to some people. Many are offended by finding themselves in a miserable life.

See how the artist picked up the color palette. Overhead dark skies, like vices that rise up. But on the rock is sunny and even the birds have built their nest in the branches of the blooming world. While the Lord gives such natural phenomena, there is always hope that everything will turn out for the better.