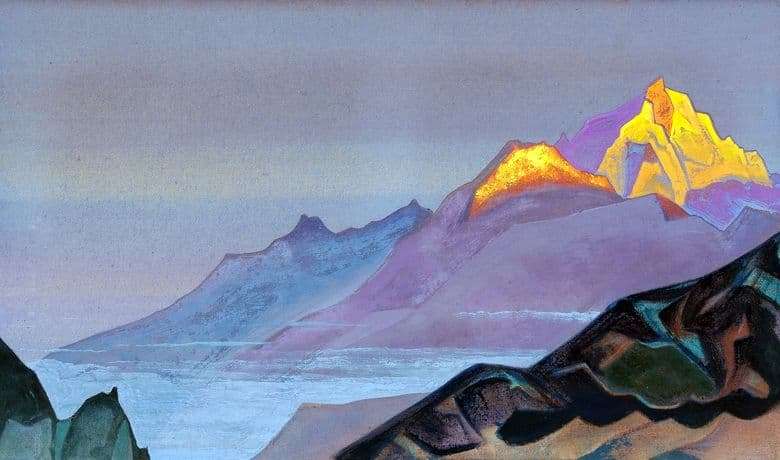 The artist managed to combine several ideas and designs in one work. The first thing we see when looking at this picture is the mountains. For Nicholas Roerich, the mountains were sacred creations of nature itself. He was sure that there was a great secret hidden in them that would help all of humanity. The painting “The Way to Shambhala” is part of a series of works dedicated to the Himalayas. Roerich and his wife spent many years traveling in India, China, Tibet. And wherever they were, he saw mountains. They inspired Roerich to write this work.

But besides the image of the mountains, we see the hidden message, which is enclosed in the title of the work “The Way to Shambhala” During his travels in Asia, Roerich learned about the magnificent state of Shambhala. It is not on the map, no one knows where it is located. Roerich learned all references to this mysterious country from books and legends. It is believed that if you find Shambhala, then humanity will acquire great knowledge. It is this legend and tried to portray the master on the canvas.

It is believed that the entrance to the lost and forgotten country is located inside the mountain Kanchenjunga. It is likely that the artist decided to depict this particular mountain. Thus, the creator as if brings us closer to a great clue. We look at the mountains, and we understand that there is a great secret hidden in them, which will soon be revealed.

Nicholas Roerich, in writing this work, decided to move away from the usual cold palette. Here we see that cold colors are combined with a warm gamut of colors. But there is no contrast. The colors blend perfectly with each other, blend and harmoniously convey the amazing shades of the Himalayas.

In the foreground are very dark mountains, almost black. Sunlight does not reach them. A little further, behind the great ocean of fog is that very mountain Kanchenjunga. The top of the mountain is gently illuminated by the hot sun. Mountains shine, beckon and attract the eye. Depicting the solar glow, the artist wanted to show that it is this mountain that is the key to unraveling the mysteries.