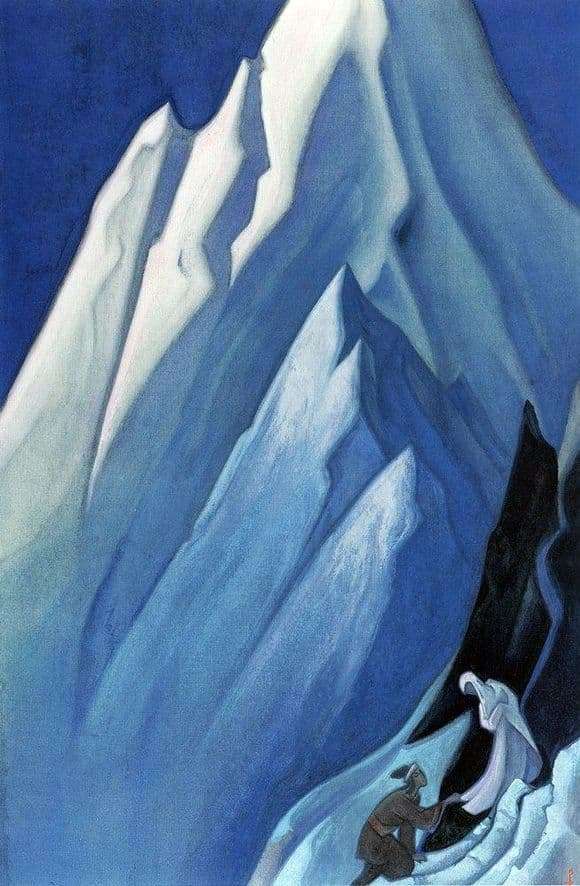 Nicholas Roerich with his work entitled “The Leader” shows the important quality that is characteristic of wives in the lives of their husbands. After all, he devoted this picture to his life’s companion, Elena Ivanovna. If you delve into the biography of the artist, it becomes known that his wife was for him a kind of mentor in life.

Elena Ivanovna Roerich owned a lot of works on philosophy, Buddhism and other sciences. In addition to science, she devoted most of her life to her husband. Together they passed all the hardships that fate had prepared for them.

The picture resembles an excerpt from the Soviet cartoon. Before us appears as a character from fairy tales. The blue color of the woman and the young man’s dress seem to be a passage from the “Snow Queen”, but this is far from the case. The clothes of the young man are characteristic of the dress of the peasants of the 18th-19th century.

The young man, clambering behind his companion, extends his hand to her. She condescendingly, holding her hands on her chest, is waiting for him, leaning his head slightly downward. They are in the middle of snowy mountains. This can be understood about the hills covered with snow.

With this work, the artist emphasized a certain point from his own life. After all, with his wife, Elena Ivanovna, he passed through the mountains of the Himalayas on one of his journeys. And his companion was for Svyatoslav Nikolaevich support, which is so necessary in difficult life trials. After this, the painting “The Leader” was born.

The painting received recognition in recognition in the 70s, when Svyatoslav Nikolaevich, the artist’s son, brought her to the Soviet Union. Her first demonstration was in the centenary of Father Roerich.