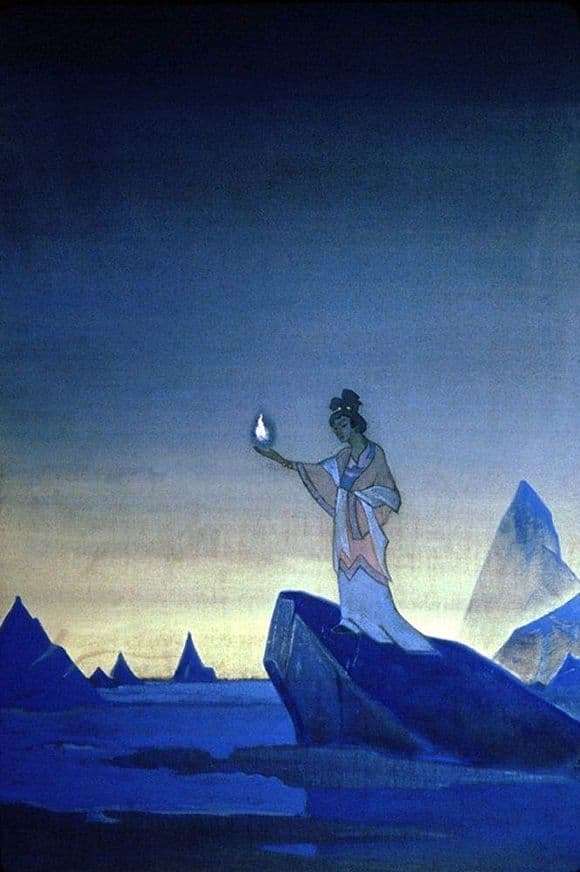 Agni Yoga is a teaching that combines the features of Eastern teachings with some features of purely Western teachings, it is also called “Living Ethics”. It was created by Roerich’s wife, he himself took part in the creation, helped write the book, and the painting Agni Yoga expresses what the teaching was for the artist. And it was light in darkness, a guiding beacon in a raging threatening world.

The picture shows the mountains – Roerich’s favorite motif, who has been singing for them all his life, the search for Shambhala and eternal enduring beauty. The sky above them is iridescent, from yellow to dark blue, the sharp peak scratches its top, but it can not tear. On a lonely rock, raised above the world, is a woman (the model for her was Roerich’s wife, Helen, which is quite symbolic).

She is wearing an oriental type of clothing, falling down to her toes, her hair is tucked away in a high hairstyle, evoking memories of Japan or China. One hand – the right one, which means that the truth is in it – it keeps stretched out in front of it, and a white fire, the flame of Knowledge and the Supreme meaning is burning above the open palm.

The picture is written in such a way that a woman resembles a guiding star or a lighthouse frozen alone on a rock. Everything around her is made in cold tones, blue, gray, purple, and she herself is the same – cold, detached, and even the flame in her hand is not scarlet or yellow, but white. It can illuminate, but it cannot warm it, and whether the truth is not in fact – it will not give life to heat, it will only light it up and indicate where to go further. Only a thin strip of yellow on the horizon, rapidly darkening above, seems to be a hope for dawn, which will come sooner or later.

A woman stands in a cold, muddy, dreary world, and together with a white flame above her palm, she is preparing to rise above the world, the shining sun, which will illuminate and warm it with the light of the Supreme Truth.