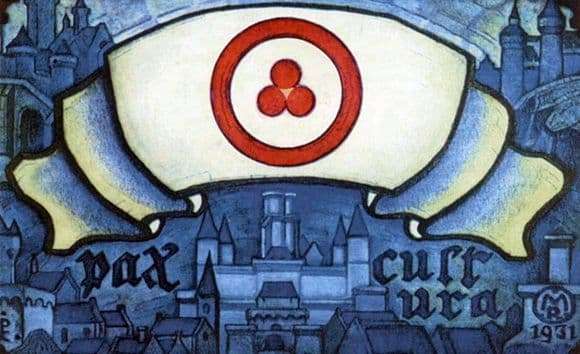 Roerich is not only an artist, but also the ideological inspirer of the “Roerich Pact” – a document that contains the inviolability of historical and cultural monuments of the whole world in any situation, including war. The sign of the pact is the so-called “Banner of Peace”, which consists of three red circles enclosed in one large circle. There are different interpretations of this symbol. According to the first – it represents the past, present and future, concluded in eternity.

According to the second – it is religion, knowledge and art, enclosed in a ring of culture. Christians see in the banner a hint of a trinity, according to which God is the Father, Son, and the Holy Spirit, who, despite the trinity, is one God. Roerich himself asserted that the sign he chose is found in many cultures, and everywhere his meaning is close to holiness. It does not happen just like that – it is a sign of truth, universal knowledge and grace. To mark them cultural values ​​that are protected by the “Covenant”, reasonably and correctly.

The “Banner of the World”, as a painting, represents the banner itself against the dark blue gloomy city of truth. Shambhala, the land where the truth triumphs, many-time sung by Roerich is not forgotten by him here too. There he shows that wherever the Banner flutters, great and truth and supreme meaning reign, and to come to worship the values ​​marked by the Banner is the same as touching Shambhala, albeit indirectly, with the edge of an unworthy consciousness.

However, as is often the case with Roerich, the picture also has a background. According to him, the blue city is not Shambhala, but a symbol of the whole world, which is in ignorance and darkness. The banner raised above it should become a guiding star that will lead those who seek to Truth – hence the cold, boring colors under the banner, and its almost palpable radiance, which is ready to change the world if there are enough people who will accept it as their sign.