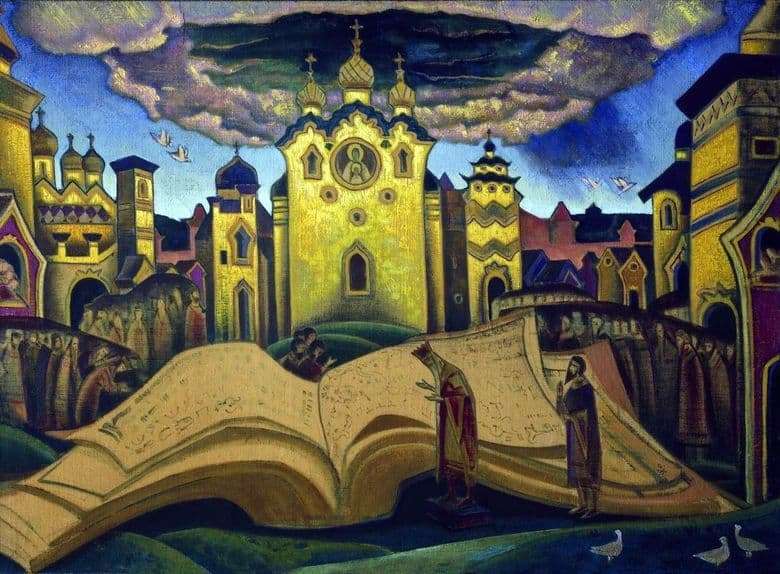 Roerich is one of those rare artists who is trying to understand and analyze philosophical and complex issues through his works. The artist mainly focused his attention on the description of the originality of the Russian people, to help the viewer travel back to the days of distant ancestors. His paintings help to reveal the essence and characteristics of the Slavic people.

His work “The Pigeon’s Book” has philosophical significance and demonstrates the spiritual principle of the Russian people. In the picture before us appears the image of the book, which tells about the origin of the world. “Dove”, that is, deep, having a deep meaning, which reflects the answers to philosophical questions. With the book, which is reflected in the picture of Roerich, they link an interesting legend. This book appeared unexpectedly, namely from the cloud and attracted the attention of different categories.

Everyone wanted to reveal the secret and find out what was hidden in this book, but they were afraid, only the ruler David Yevseyevich was not afraid to open it. This book contained the word of God, and the essence of the creation of the world. Due to the fact that the book was too heavy, King David could not read it, but the wisest ruler knew the word of God by heart. And then he revealed this truth to other residents.

In the picture, the artist depicted the same scene, as described by the legend – a thundercloud, and below is an open blue book that fell right in front of the cathedral. And before the open book is an old man – King David, who conveys the philosophical meaning of the blue book to his people.