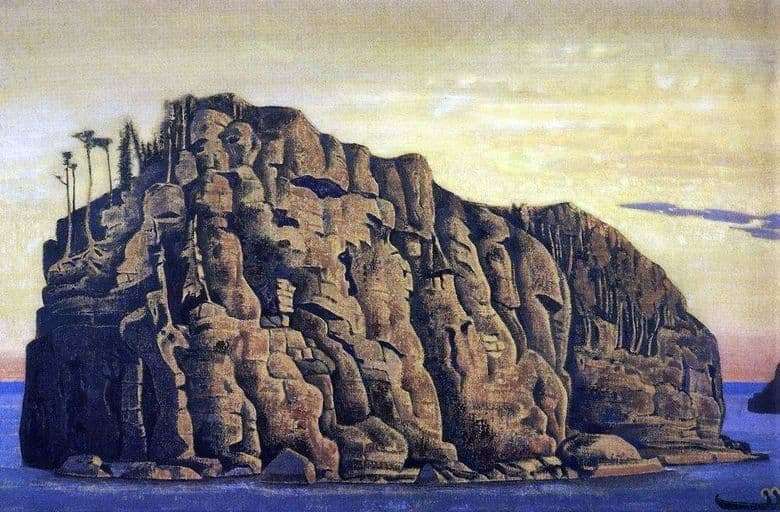 The picture of Nicholas Konstantinovich Roerich “Holy Island” depicts the steep, inaccessible rocky coast of a lonely standing island. On the summit, on the side of the majestic cliff far from the viewer, stands several individual trees. These are tall thin-barred pines stretching towards the sky, but even they seem modest and insignificant against the background of the harsh austerity of nature.

The area depicted in the picture is real, this is one of the islands of Valaam, which is called “Holy.” Surrounded by the waters of Lake Ladoga, a secluded cliff majestically looms against the sky. In the picture his image is quite symbolic. It is worth taking a closer look to notice how the cracks of the rock form an unusual pattern: the island’s cliff consists of chernets figures in hoods. Stone monks lined up in a row, their stylized giant figures, stretched between sky and water, sadly and solemnly gazing down.

A small boat in the lower right corner seems insignificant compared to the bulk of the rock prevailing in the figure. Like a short dash on the lake. In the boat, with their heads bowed in an obedient bow, two human figures, shaded by nimbus of holiness. Two saints swim up to the Holy One to climb it.

The picture is made in yellow and blue colors, and only the setting sun is indicated by a bright, alarming red strip.

The center of the picture is the island. It occupies 70% of the image, as if it suppresses everything that is around, attracts attention. It is worth taking the time to see this key figure of the canvas with all the attention it deserves. Ponder the symbolism inherent in the plot by the artist.