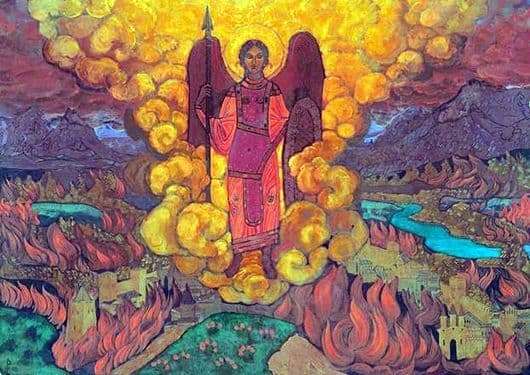 In N. K. Roerich two paintings with one plot are called “The Last Angel”. The first one was created several years before the First World War. Another picture – thirty years later, in the midst of World War II.

In the first picture, we see an Angel that descends from heaven to a burning Earth. In his hands is a spear, directed by an edge toward the sky, and a shield. The sky is almost completely hidden behind the clouds, on the ground you can see a bluish river and an emerald-green field with flowers, untouched by fire. 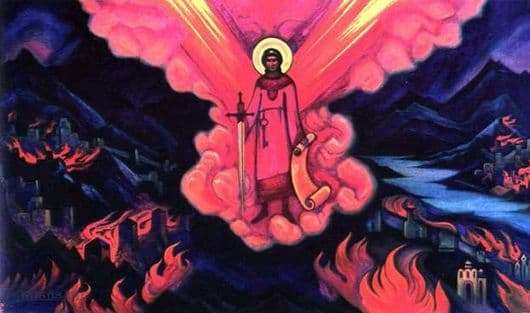 In the second picture, the same Angel, descending to Earth, holds a sword and a scroll. According to the researchers, the list contains the names of those who have lived their lives, spiritually improving themselves, and therefore can be saved. On the Angel’s belt, the key is believed to be from the New World. The belt itself is also a symbol; it is one of the signs of a higher authority.

Returning to the plot once used is connected with the desire to clarify, add, develop. Over the years, the world has completely changed, Roerich himself has changed.

The plot itself is taken from the bible. The last Angel bears the wages of sins and spiritlessness and the beginning of a renewed life. But at the same time, this is a warning about numerous catastrophes that will inevitably happen if humanity does not turn away from the chosen path.

The artist had the unique ability to analyze and predict where a given social force would turn at that time. According to historians, the paintings appeared at the moments when the upcoming social cataclysms were considered impossible.

Roerich in those years appeared many paintings of an apocalyptic orientation. In addition to the “Angel of the Last”, this is, for example, “The Herald” and “The City of the Doomed.” All used plots are taken from the Bible and folklore and foreshadowed the almost inevitable destruction and suffering.