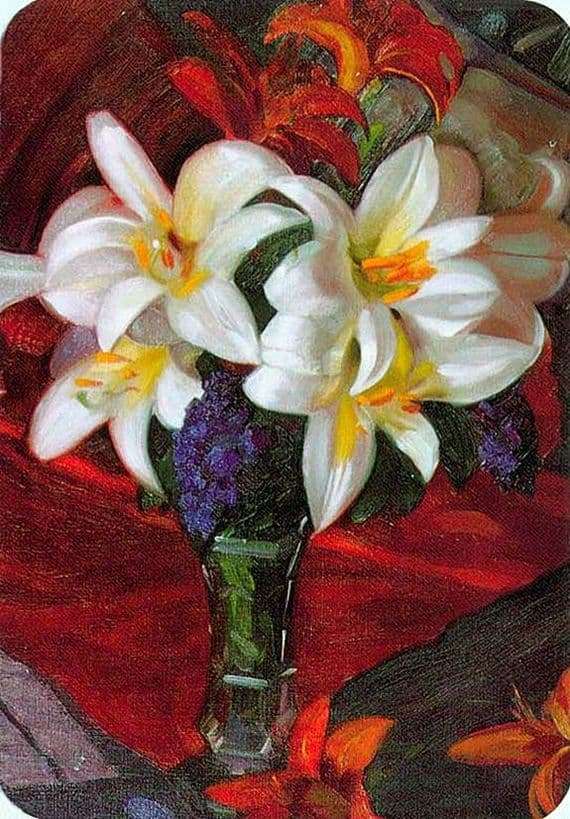 Roerich – the famous Russian artist, archeologist, writer, on his account a lot of canvases, many of which are exhibited in museums around the world. The artist had a very active life position, believed that the world needed to be changed, that the road he was following could only come to ruin.

Most of his paintings are about this – often they literally scream that the world needs change. “The Call of Shambhala,” for example, is a message that is more obvious than one can think of. But sometimes among his works there are also peaceful ones, which are needed not to change the human consciousness and reach the deaf, but to show the beauty of nature and its beauty.

“Lilies” – one of these works. The picture shows a vase with white and red lilies, and lilac, surrounded by a fabric of bright colors. White lilies – a symbol of purity and freshness, they stand out on the brightness of the colors of the picture with its radiant whiteness. Attract attention. The rest is just the background for them. For their innocence, for their tenderness.

In some way the picture is deeply symbolic. Scarlet, green of such shades, that they literally scream and howl – this is a world, bloody, torn by war, in which children are killed and raped women. And white lilies – that light and pure, that else is in this world. Children’s laughter, female smiles, herbal tea on the porch surrounded by good friends, the course of a mountain river, which you can watch for days. No matter how much scarlet there is, white will always remain and will always attract the eye.

Only it can heal from the spiritual emptiness and fill the sea of ​​scarlet anger.