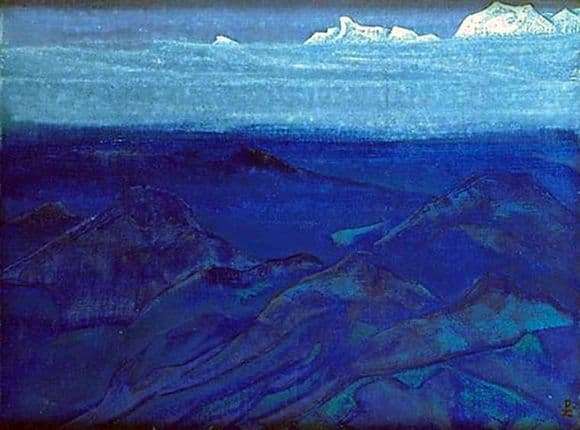 Mountains are the eternal, recurring theme of Roerich’s paintings. He painted the mountains at dawn and dusk, the mountains are summer and winter, low and high. He sang mountains like a song, weaving plots into them and using them to convey some truths.

In the mountains, he saw the best, the only place where you can find real meaning and know yourself. Shambala, the promised city, was also in the mountains for him. Being an adept of Eastern philosophies, Roerich believed that the main thing was the voice of universal harmony within man, and that there was no better place to find that voice than mountains.

“Mountains” – one of these paintings-song. Pictures that show how good where few of us have been. It depicts the mountains nightly, in a cold color, dark blue. They literally blows ice and snow, but they are strangely attractive. they do not want to admire the window – they want to enter, stepping into the frame of the picture. And above them – white clouds. They are shown almost by shading, with a light blue fleur, which, in contrast with the mountains, appears to be especially tender. He hides behind himself high peaks that peep out from behind snowcaps.

Every viewer is free to imagine what is behind these clouds. Perhaps there are gigantic mountains, empty, on which no man’s foot has stepped and on which no flag flies, in which it is good to breathe air of height and listen to complete silence that cannot be broken. Any loud sound can trigger an avalanche. Or maybe there is a mysterious Shambala, its bridges and bridges, its towers and houses, its main square.

Perhaps, if the clouds had dispersed, one would see a rotating vane in the form of an arrow, and a boy running along the pavement, and a sage with universal peace in his eyes. Perhaps if the clouds had dissipated, anyone could have known the Higher Meaning and Meaning within themselves.

But, unfortunately, the clouds do not scatter. To see what is behind them, you need to go to the mountains yourself and see.