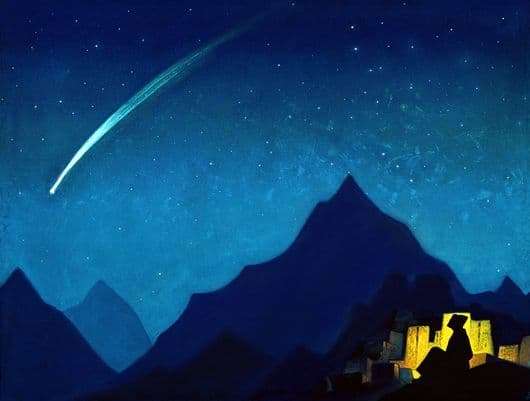 Throughout his life, Roerich devoted himself to the search for an ideal world, studying the beauty of the Universe through sacred treatises of various beliefs. His teachers were the monks of Tibet, India and Asia.

After spending more than a decade in search of higher intelligence, he makes sketches on the topic of the relationship of man with the cosmic, with the sky and the world as a whole. One of his manic ideas was the search for Shambhala. According to the beliefs of Tibetan monks, this place means paradise, which not everyone can achieve. Only by overcoming difficulties can one become a hero who has fallen into heaven.

Roerich sought to pass on this knowledge to his people, who were in decline in the era of the authoritarian regime of Stalin. After being strongly persecuted, he began to develop reforms among narrow persons who were committed to the teachings of the Roerich movement.

The picture expresses the love of the Tibetan mountains, which he has watched for years. According to one of the legends, it is high in the mountains that the secret country of Shambhala is located, where all the secrets of Being are gathered. This is the highest point of closeness to the higher Reason. According to the teachings of Tibetan monks, only a “pure and spiritually enlightened” person who does not know “fear and reproach” can reach. On the canvas one can see that below in the light of the city the figure of a man looking into the distance, into the unknown is illuminated, realizing the infinity of this world and its knowledge.

Many shades of blue are blended in the sky, which recreates outer space, revealing unknown faces. The city here personifies the earthly world, the person sits in the middle, in a transitional state of mind. Striving for the highest, the light of buildings pulls him back to his family and friends.

Different nations, symbolizes the falling star in its own way. For some, the star is the symbol of the soul of the ancestors, which fell and was reborn on Earth. For others – a sign of hope, success and good luck. The seated figure only reminds that the person himself decides how to interpret the symbol. To be a part of something in common, or to remain sitting on a stone in meditation.