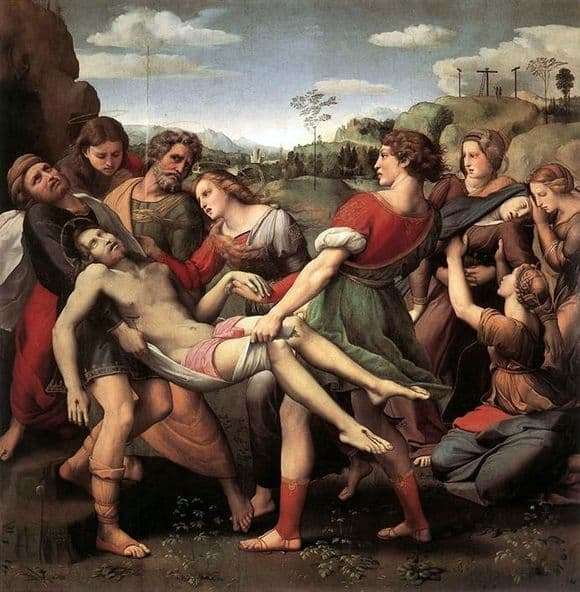 Raphael often happened to turn to Christian plots. Rethinking them, he sometimes changed them so that they changed a little, becoming more alive and fuller.

“The position in the tomb” depicts the moment when the body of Christ, taken from the cross, was carried to bury his relatives and friends. Holding him on the stretched fabric, they carry him to the gardens, to the place where one rich man gave his personal burial tomb.

The body of Christ is lifeless. There are bloody nail marks on his hands and feet, his head is thrown back, his eyes are closed. The body hangs like a living person cannot hang – relaxed and at the same time very soft, like a bag of flour, and not flesh and bone. His disciples carry, support, pull. Their faces are mournful, the youngest is drawn to Christ, as if wanting to touch him and not believing that he could die. None of them believes, but the body in their hands is the best proof of death.

For men who carry the body, are women. Mary was among them, but in the picture she loses consciousness, stumbles, and is caught, supported by caring sympathetic hands. Mary Magdalene, who was on her knees, did not believe in death and grieved for the dead, is drawn to catch the Mother of God, and her posture itself expresses confusion and horror. The rest is calmer, they keep better, and somewhere far away, over the procession – awkward, mournful, afraid of the cause for which they gathered – crosses rise on bald Calvary, which is forever destined to remain in people’s memory as the place where God was crucified.

Raphael gives the scene a sad vitality, creates something from it that is intuitively understandable. At one glance, one can see the grief and confusion of the disciples, the face of the Virgin Mary expresses deadly agony, as if she was crucified with her son, as if all his pain was hers.

God died, and no one but his disciples noticed this.