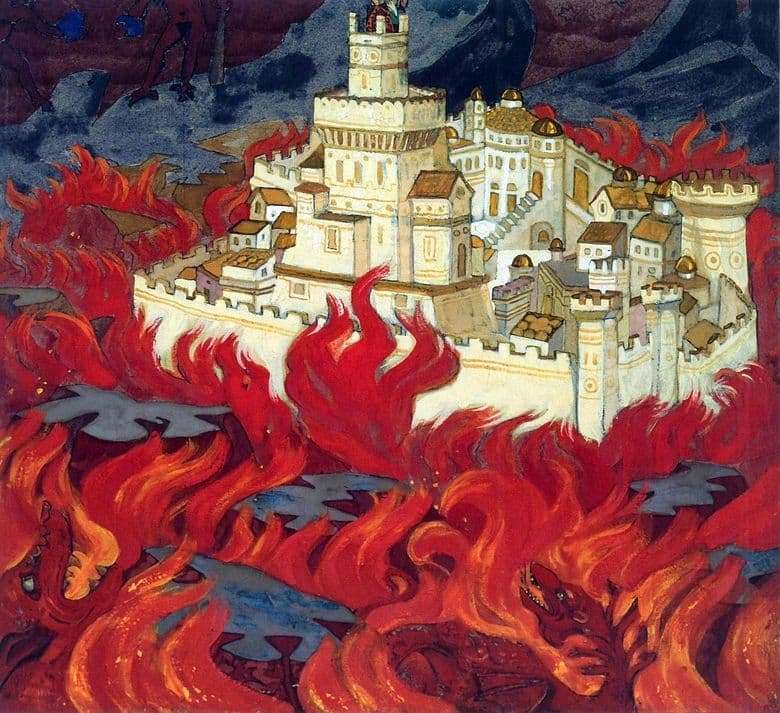 The work “Purest Hail to the enemies of bitterness” is included in the large collection of paintings that Roerich dedicated to the upcoming war. This work was written in 1912. There was tension all over the world. The world powers were in conflict. Nicholas Roerich did not see anything good in the impending war. He was a peace-loving man and rejected all violence.

The First World War, according to Roerich, should have split, to destroy the world. Moreover, the artist understood this both literally and figuratively. The master predicted that war would destroy not only cities, but also people’s thoughts.

This work reflects the essence of any war. Nicholas Roerich, while writing the work, fully devoted himself to symbolism. Here we see that a large white-stone city is surrounded by uncontrolled fire. It seems that this heavenly city suddenly found itself in hell. Around the city walls rise mountains, buried in flames. On the tops of the rocks there are monsters resembling devils. These dark, winged figures of creatures personify evil. In their hands they hold huge cobblestones, which will soon be thrown into snow-white hail. In addition to devils, huge fire-breathing dragons are attacking the city. It was they who staged this terrible fire that could destroy the shrine. The city is a symbol of purity, rationality, love and peace. Despite the flames raging around, urban buildings are not destroyed. They seem to resist evil.

It is impossible not to notice the defender of “the most pure city.” George the Victorious rushes through the hellish inferno to cut the monsters, to destroy evil. The artist decided to portray both the city and its protector in one color in order to emphasize their unity.

This picture conveys Roerich’s thoughts about the war. He believes that good always triumph over evil, reason will surpass stupidity and incontinence.