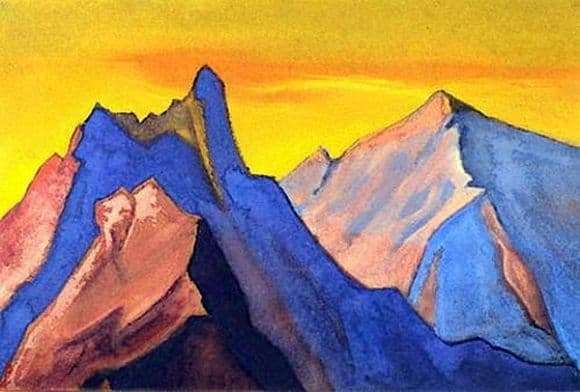 Roerich – singer of the mountains. Considering that a person should live in them, he immortalized them in paintings with enviable stubbornness and skill, as if giving them a new life on paper. Shambhala, the city of great truth, is hidden in the mountains. Sparse air is useful for understanding oneself, thin mountain peaks and their beauty cleanse the soul, and life among real nature, not tamed by technique, strengthens the body.

“Himalayas” – an idealized, song image of the mountains, on which they appear mysterious, majestic, legendary. Not just the terrain located in a particular country, at a specific width and longitude. It seems that they are transferred to canvas directly from legends in which heroes pass rivers and mountains, in which warriors grow to the waist to the ground, in which the devas eat people, and cunning is valued on a par with military prowess.

They are shown at sunset, covered with a hot scarlet glow, too bright for dawn. Their slopes glow with a red flame of the sun, while others that remain in the shadows are hidden by thick blue twilight. A man standing in the shade would have thought it was night.

A person standing in the sun would feel that it was still only an early evening. A man who had risen above the other two and had climbed to the top, would have seen that it was as if the mountains could not decide what time of day reigned in them. Their duality attracts the eye, creates a marvelous contrast between the radiance of the day and the twilight of the night.

The sky above the mountains is fiery, orange, and they poke peaks at him. There are no people in the picture, no smoke from the chimney of a hermit or shepherd’s house, no human figure, or any other trace of presence. The mountains are virgin, clean, empty and quiet.

People who have come to them will have to become one with them, to establish a true silence within themselves, and, perhaps, they will be able to understand the Meaning of the Whole only mountains know.