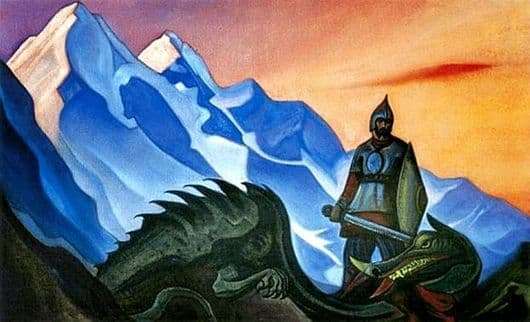 Roerich has a unique, “Bogatyrskaya” series of paintings dedicated to the Second World War. Two paintings from this series are in the Novosibirsk gallery. One of them is called “Victory”.

The painting was written in 1942. The war was in full swing, the worst days of the Leningrad blockade were still ahead. But Moscow managed to defend. Partly, this picture is dedicated to the victory of N. K. Roerich.

In the center of the picture – the hero who killed the dragon. Enough classic story, known in many countries and options. Roerich gave this story a new meaning.

The bogatyr is a typical old Russian warrior in armor, corresponding to the era. The dragon (probably the Serpent of Gorynych, but with one head) is a dark green monster with a color that resembles the Reich’s military uniform. The artist used the highest peak of Siberia, Belukha, as a background.

Dawn. The sun is already flooding one side of the Belukha, and will soon go higher. The importance of the situation is emphasized by the dawn red-hot sky, which occupies about a third of the picture. A small area on one of the mountains.

The battle near Moscow is one of the first battles in which divisions arrived from Siberia. And the warrior himself – Siberian, with oriental features, in medieval armor.

For Roerich, the hero is, first of all, strength and power. As the dragon – because the artist lived for so many years in the East. The man who killed the dragon, he barely keeps his feet. There is no jubilation, no pathos – only fatigue and the feeling of the hardest work done, joy and anxiety. Joy – that still won. Anxiety – what can grow another head or fly another dragon.

In 1975, the younger son of the artist donated the painting to the Siberian Branch of the Russian Academy of Sciences. In the presentation, it was especially noted that in this film Roerich tried to express faith in the Victory and a great future for all.