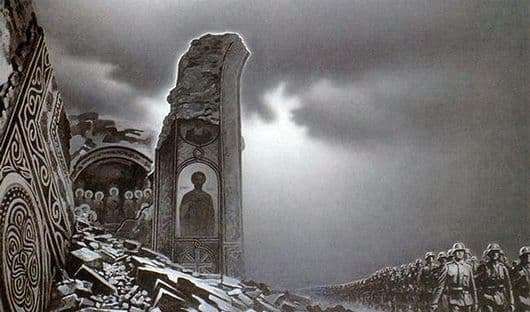 When you look at this grand picture, you feel the invasion of something strange, incomprehensible to the ordinary person. We see an army going off into the distance. The faces of the soldiers are absolutely serious, not a single emotion is reflected in them. There is a feeling of hopelessness and inevitability.

This picture is incredibly symbolic. The difficulty lies in the fact that all the characters selected in it can be interpreted in absolutely different ways.

Vasiliev dedicated his picture to the events of the Great Patriotic War. People must remember them in order not to accept war in general.

We feel the inevitable gait of the Nazi hordes who go to the Russian land. It is no coincidence that the name of the film “Invasion”. Vasiliev does not represent the actual German invaders. The viewer has the feeling that these are enemies who do not have a temporal characteristic. They have always been. The film is dedicated to the Great Patriotic War, but its subjects are much wider. It is truly philosophical, reveals the attitude and outlook of the artist.

Vasiliev’s canvases are incredibly cold. It is no coincidence palette of blue and gray tones. Before us, as if not a picture, but some kind of gloomy ancient engraving.

The artist throws us into pre-Christian paganism. Nietzsche played an enormous role in the spiritual development of Vasiliev. The artist was greatly influenced by the mythology of the philosopher. She drunk all his stories.

Today, the picture “Invasion” is relevant as never before. The artist reveals here not his understanding of wartime as such, but makes the greatest generalization: the enemies at all times seek once and for all to put an end to the culture of Russia and its special spirituality.

The artist firmly believed that the self-consciousness of the Russian people is immortal. This is what becomes the dominant of all his work.