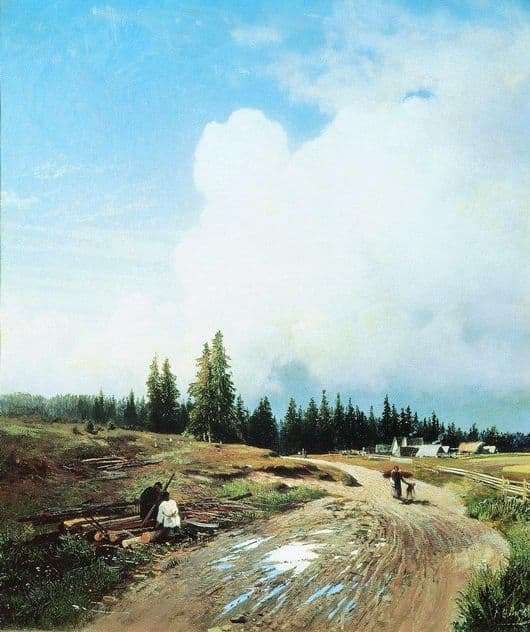 Fedor Alexandrovich Vasiliev – contemporary of Russian landscapes. A special moment of influence on his work turned out to be an acquaintance with outstanding artists I. I. Shishkin, I. N. Kramsky. A careful study of nature was accompanied by numerous sketches and sketches. Education art Fyodor Vasilyev graduated in 1867. The artist’s talent grew rapidly, his drawings reflected a certain poetic sensuality and depth of the colors of Russian nature.

The creation After the Thunderstorm is a work reflecting the maturity of the artist Vasiliev. Painted picture in 1868. The plot expresses the landscape of rural type. It is very hot outside, the day is infused with the warmth of the sun’s rays, so that it is difficult to breathe. Soulful day ended, and I want it to rain. A thunderstorm will thunder and moisture will envelop the entire horizon. Probably, on such a day, the creator created his masterpiece. The same sultry and overcast.

Some attention is paid to the sky – it attracts and lowers into its bottomless depth. Clean and blue, without clouds, the sky resembles a blue fluffy glomerulus. Mentally, you can even imagine the sea, which stretched for many kilometers. The artist showed the majesty and beauty of the sky after a thunderstorm. Creation is filled with serenity, causing good feelings among art lovers. The will is given to fantasies, and the heavens that Fedor Alexandrovich portrayed are represented.

The picture “After a Thunderstorm” reflects a calm and languid atmosphere in which it became easy to breathe. The earth is full of small rain dimples, the road is filled with people who go out to breathe air. In the background there is a spruce forest. This corner of nature, expressed in dark green paint. Notes the good mood of the artist. The harmony of color and soul of Vasiliev is clearly combined in the film “After a Thunderstorm”.