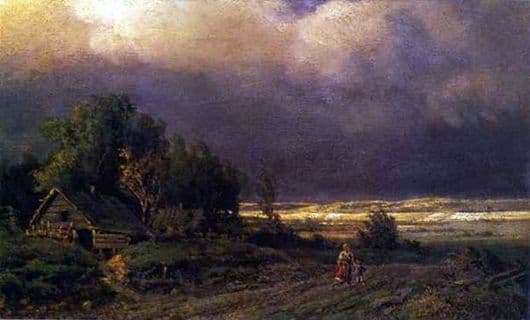 Vasiliev is a wonderful landscape painter who has created many works. His paintings are distinguished by lyricism and lightness. Probably the favorite storyline of the painter is a thunderstorm. He has especially many dramatic works on this subject. The work “Before the Thunderstorm” was written by the author at the end of his journey along the Volga.

The painting “Before the Thunderstorm” was painted in golden-gray shades. The gray clouds in the sky indicate the imminent thunderstorm. But through these heavy clouds bright golden rays of light make their way, filling nature with the expectation of something joyful.

In the picture we see the hut depicted, covered with tree crowns. People rush here to hide from the approaching heavy rain and the terrible violence of the elements. Vasiliev managed to portray a man as a constant part of nature, an inseparable component. With this technique, the painter points us to the unity of nature and man.

The storm itself is an amazing natural phenomenon. The sky is painted in rich dark colors. In the picture it causes admiration. It is also surprising how the author used a large number of multicolored shades, softening their transition, so that the boundaries between the strokes are indistinguishable. The artist managed to capture nature with amazing precision several minutes before the storm. Vasiliev showed in his picture the tension of nature and its internal conflicts.

Vasiliev Fedor is a great artist, depicting the sky and the waters of the sky. The motives of nature before a thunderstorm are often repeated in the artist’s works. Perhaps he was attracted by the tension of nature in front of this phenomenon. Fyodor Vasilyev is a talented Russian landscape painter whose distinctive feature is poetry and a rare harmony of colorful flowers.