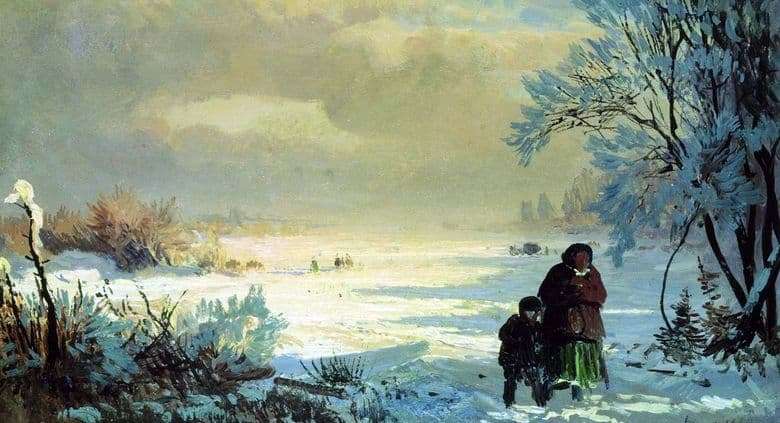 The painting “Winter” written by Vasilyev in 1871. It depicts an endless winding rural road along the forest. Everything around is tightly covered with snow, but on a deserted road there are no traces of a sleigh, a woman and a little boy walk along it. They are so tired and froze from the path they’ve taken that they walk, slouching, hiding their hands in the sleeves of their clothes and pressing them to their breasts to warm them. The picture is filled with sadness and loneliness. Stunted bushes, fragments of branches and massive trees covered with snow.

From the frost, it seems as if their branches turned into ice spines. The snow does not reflect the brilliance of the sun’s rays and does not play with bright reflections. It is a muted white color with a mixture of yellow and bluish shadows, feeding from trees and bushes.

On one side of them are trees covered with snow, on the other – bushes shriveled by frost in the snow.

The snow-covered, deserted, winding road stretches into the distance and merges on the horizon with a sky of such a sad tint. The horizon between them is blurred, as if it does not exist in nature. The sky is a gray-yellow palette with a small gap in the distance.

All not long works of Fedor Vasilyev can be divided into two parts, before writing the picture “Thaw” and after. The first period of creativity was distinguished by the brightness and expressiveness of the color palette. The second period has become more faded and dull.

The painting “winter” refers to the second period, after creating a masterpiece painting “The Thaw”, which brought worldwide recognition to the artist.

Today, the painting by Fyodor Vasilyev is in Russia at the State Tretyakov Gallery in Moscow.