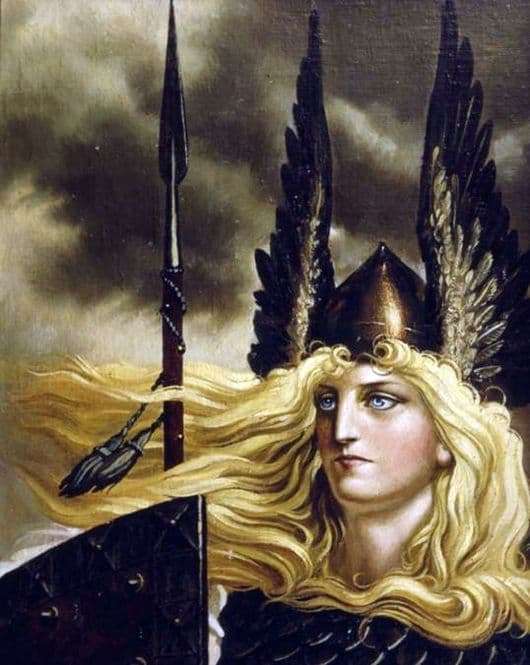 The painting “The Valkyrie” by Konstantin Vasilyev depicts Odin’s daughter – a belligerent, blond maid who takes the lives of perishing warriors.

In general, the image of the war for Vasiliev was rather connected not with murder and deadly battles, but with the defense of the Motherland and great battles in which there was a place for its beauty and heroism. So in this picture, the ideal features of the girl are combined with her militant look. Strict nose, chin and lips in combination with cold blue eyes make it clear that this is the daughter of the icy North, but not that delicate beauty that attracts the attention of young guys. Her firm gaze and heavy Scandinavian ammunition are signs of a warrior in her, able to repel any enemy. The girl’s eyes are calm and directed far towards the horizon in anticipation of another warrior who is destined to fall on the battlefield. The holy duty of the Valkyries is to escort a brave warrior who heroically gave his life, before Valhalla, the mythical country of true warriors.

The girl is depicted against the background of dark and heavy gray-black clouds, which, combined with the bronze armor and the severity of her face, makes the picture somewhat gloomy and gothic. But the necessary contrast is created by golden-white hair majestically developing in the wind. They give the picture of life and dynamics. Yes, the Valkyrie is a girl who could hardly create quiet home comfort, but nevertheless she captivates the viewer, evoking admiration for her strength and perseverance, which have always been characteristic of the Rusich peoples.

Vasiliev took the basis for creating a picture of an image of Valkyries from Scandinavian myths, but not those terrible angels of death, seeking to enjoy the bleeding fighters; and later, romanticized, Valkyries – white-skinned maidens with golden hair, often appearing as horse riders on white horses or in the guise of swans. But the artist added to this girl and the picture the features that make you see in the composition only something Russian and completely dear.