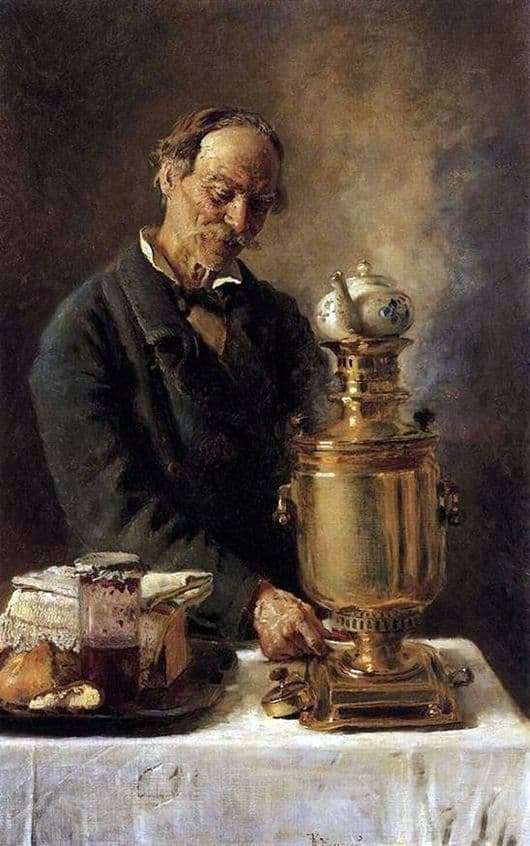 The painting “Alekseich” was first shown as an exhibit of a traveling exhibition, which was attended by its author Konstantin Makovsky, in 1882 and was rightfully included in the golden fund of Russian painting.

The hero of the picture is an elderly Alekseich, dressed not richly, but rather decently: a slightly battered jacket, a white shirt and a bow tie, who arranged a small tea party with a samovar. On his face expressed pacification, his eyes dropped or even closed from pleasure. He drinks tea from a small saucer, which we see in his hands. We can also assume that this muzhik decided to take a cold from his tea.

Other few elements of the picture are the golden samovar, the steam from which rose high up and filled the whole space; carelessly sliced ​​bread, a half-empty jar of jam and a folded towel on a tray; a table covered with a worn and leaky tablecloth. In all this, it is not Alexeyich’s poverty or his negligence that is seen, but his ease and simplicity: this hot tea with jam is quite enough for his happiness.

The artist Konstantin Makovsky was once appreciated and was a fashionable and highly paid Petersburg portraitist, who usually wrote in the academic genre. He painted colorful, simply magical female portraits that allowed him to earn a fortune and live a luxurious life. But he was also interested in the olden time, which was reflected in his work and in the atmosphere of his house. And, of course, many paintings were written by him in the “Russian style”, which in the 80s of the 19th century was quite fashionable in Europe.

Sometimes he looked at the life of previous centuries in a somewhat idealized way, and with several acquaintances he talked somewhat down, but this did not affect his work, which is truly worthy of all praise.