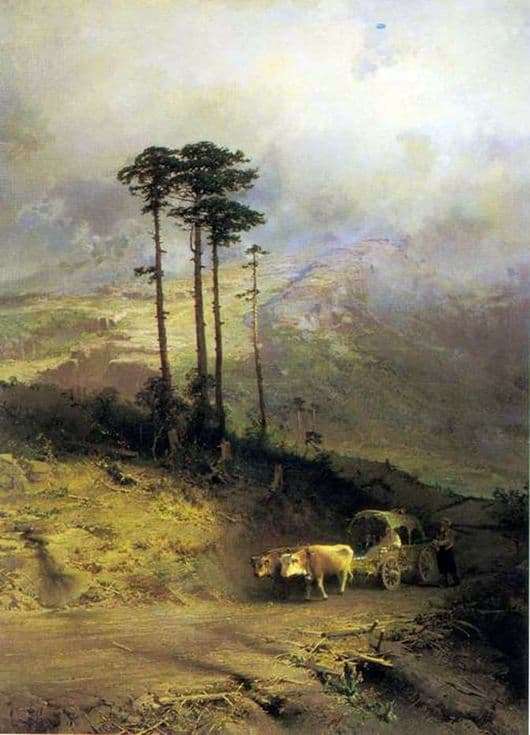 The picture has a somewhat sad landscape, most likely, beginning or mid-autumn, the accent of the artist is clearly executed on the stage, which is located in the central part.

We see that a carriage pulled by bulls stopped on the road and apparently there was some kind of breakdown, because the driver, with a close look, tries to peer and find the reason for the stop. In the carriage itself, a female figure is visible, which has tilted its head down and awaits the moment when they can continue their journey. This may be the cabby’s wife, and her excitement is associated with the fact that it will soon be dark, and in the Crimean mountains, alone with nature there is a rather bad state of affairs.

It is worth noting at this moment and the beautiful, simply phenomenal game of the artist with a deep palette of gloomy and very rich shades, which only add sadness and a certain drama to everything that is happening. It also adds to the general drama and sullen sky, which obviously will not miss a single ray of hope for the light, as it is completely captured by the clouds that have tightened it. The artist depicts the movement of clouds in the sky in such a way that it seems, if you look closely, you can see their movement.

Twilight rolled faster and faster, and the driver struggled to continue his journey as quickly as possible. Despite the fact that the foreground is sufficiently lit, for some reason, the master decided to leave the mountains themselves in the shade, maybe this was done in order not to distract the viewer’s eye from the main action.

The whole landscape is covered with yellowed grass and shrubs, and at a distance there are tall pines that stretch upwards. The use of just such a palette of colors makes you think about the inner feelings of the artist himself, and his conflicting feelings at the time of writing.