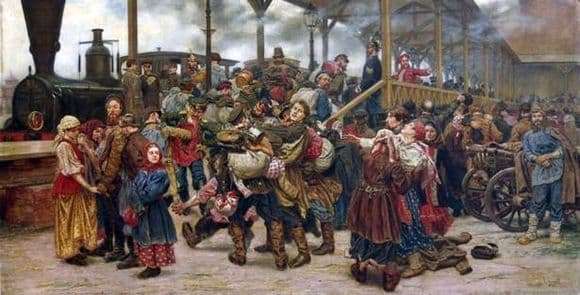 Artist Savitsky was a very prominent representative of the Association of Traveling Art Exhibitions. More than serious in its content is the famous canvas “To War” written by him. It was written only a decade after the brutal and difficult Russian-Turkish war. And the memory of those terrible events, losses and troubles was still alive in the hearts of people. The war left a painful imprint on many families. And all these events Savitsky and dedicated his picture.

The plot is based on anti-militarist work. War is a great sorrow, revealing the experiences of the characters depicted in the picture. You can see that people are divided into several groups, in each of which their mood is expressed. But in general, one feeling is felt – despair. The sadly bent backs of women, the young recruits dancing merrily, are very close. The soldiers who have seen a lot in their lives are also depicted here, their views are serious, anxious tension is felt. There is already a train on the platform, and the gendarmes standing nearby, with their formidable air, seem to confirm that separation from their relatives is already inevitable.

Despite the fact that the pictures on one canvas are different both in character and in mood of a group of people, the picture looks the same. The composition as if unites them, thereby increasing this heavy, gloomy mood of the society. One feels a certain spiritual connection of the people depicted. Each by itself, but they are together, they are united by one big misfortune – war.