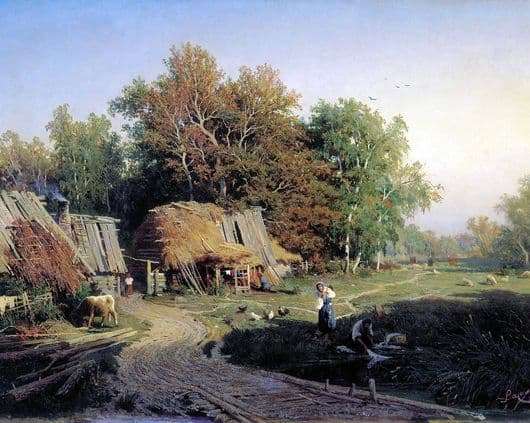 It is worth saying, starting the story of Fyodor Vasilyev’s painting “The Village”, that the work itself was written by the artist under the direct impression of his travels around the Tambov province of the Russian Empire, as well as through the provincial towns and villages of Ukraine.

That is why, in the canvas itself, the problems of the social and consumer issues of this century are clearly marked. And in this regard, it was precisely the problem of populism and its main stress that the artist who traveled along the edges mentioned above in the summer of 1869, and then, in the same year, created the picture.

The theme of populism and deep narrative for the artist himself was not so far away, because his work was directly influenced by the famous Düsseldorf School of Painting, which many artists of the second half of the 19th century passed. But it should also be said that the mastery of the paintings by the artist was directly related to his sincere love for the world, for nature and people, for his native country. He first traveled to Central Russia in 1869 and clearly conveyed all his experiences in the film “The Village”, sincerely stating that he, like his people, was going through all the hardships and adversities, but the artist had covered him love of art, which he embodied in his works.

Vasiliev spent the summer, as well as the autumn of 1869, a village called Znamenskoye, which was located in the Tambov province. It was there that he was invited by Count Stroganov, who was famous for his significant land plots in this province. In addition, in the same year he visited the Sumy province in Ukraine. The impressions he received from these trips were soon transferred by the artist to the canvas, where he depicted typical village everyday life, including hard peasant work.