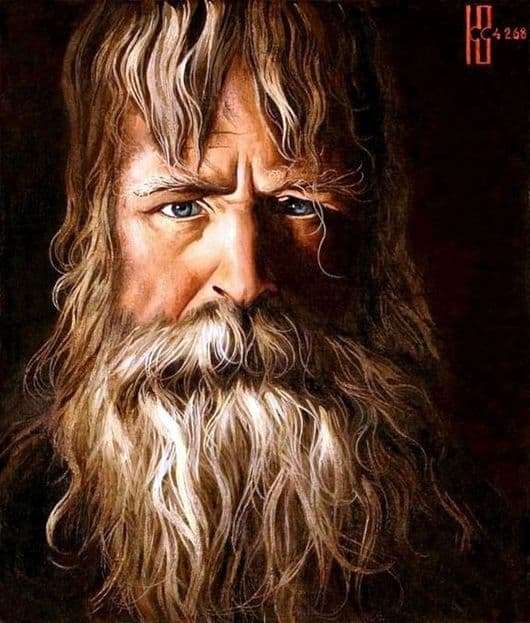 Vasilyev Konstantin Alekseevich lived in the 20th century, was a Russian artist, he is known for his works on mythological and epic themes.

In his work, there are more than 400 graphic and painting works. They often use colors and shades like red and gray.

The creator was fond of art from folk art: songs, epics, fairy tales.

He created paintings on epic themes related to the Scandinavians and Slavs, about the Great Patriotic War. He also created sketches for the paintings of the church in Omsk. Surrealism and abstract expressionism influenced the works he created in the 60s of the 20th century. In the early 70s of the 20th century, he abandoned the search for formalism, and began to work in a real manner.

He worked in high school as a drawing teacher.

In 1968, he painted in oil on canvas the painting “The Old Man”, which is now kept in the Konstantin Vasilyev Museum in Moscow.

An old man is drawn on a black background, in his eyes one can see the knowledge, the wisdom of life, which he received for his own difficult and long life.

The old man does not need much, in life he has already seen everything. His gaze is fixed and a little strained, his eyebrows are shifted. Perhaps in his thoughts he is busy rethinking his being, looking for a further path in which there will be no problems. The head is already all gray, long beard. With his bluish eyes, he seemed to penetrate the soul. His gaze is crystal clear, which speaks of a properly traveled, though not a simple, path in life.

This image presents rethinking, determination and wisdom. Only an experienced, wise and old person will go to where all the elements that can revive or destroy are joined together.

Everyone can perceive this picture in different ways, by virtue of their knowledge and faith.