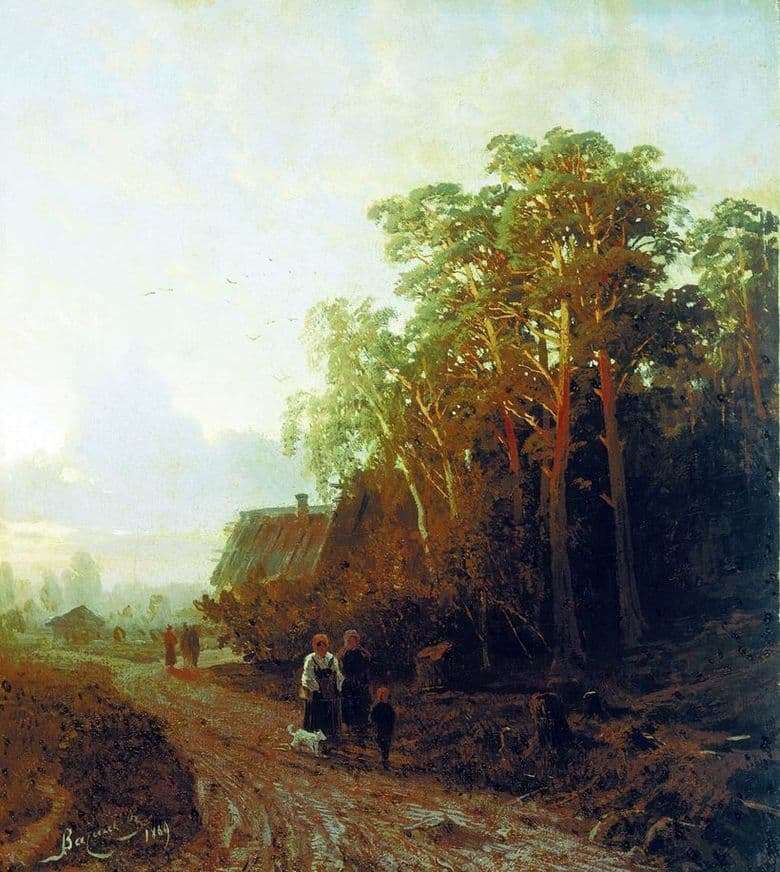 Fedor Alexandrovich Vasiliev began his artistic career at the age of 17. He specialized in writing landscapes. The young artist sought to capture nature in its various states. Unfortunately, his life was tragically cut short at the age of 23. During his short life Vasiliev wrote more than 100 paintings and managed to get into the first row of leading Russian landscape painters.

The painting “Evening”, created in 1869, depicts a simple rural landscape. In the foreground – the road on which there are several people. Probably, the artist depicted a family for a walk. You can distinguish a man in a dark coat, a woman in a white shirt and a sundress and a boy walking in front of adults. A man and a woman walk alongside and talk about something. Next to them runs a small white dog. A little further along the road you can see the figures of other people. On the right side of the picture you can see tall trees and a few stumps. Behind the trees you can see the roof of the village house. In the left part of the picture, in the distance, there are other houses and trees hidden by a hazy mist. At the top of the canvas, the artist depicted a bright sky and blue rolling clouds.

Judging by the yellow leaves on the trees and clothes of the villagers, Vasiliev depicted autumn. This is confirmed by the birds circling in the sky. They seem to gather in flocks to fly to the south, in warm countries. While working on the canvas, the author used mainly brown, yellow and white tones. He highlighted the tops of the trees in a light green color. On some elements of the composition, for example, on the trunks of trees, you can see smears of red color.

In the picture, the young landscape painter conveys the atmosphere of mystery and the beauty of nature and at the same time demonstrates the slowness of rural life.