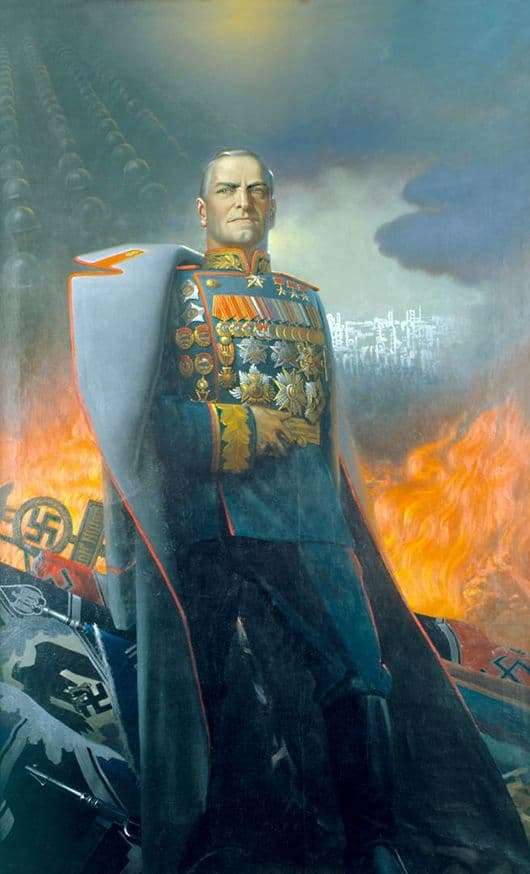 Konstantin Vasilyev in his work showed a special love for military subjects. Zhukov is an important historical figure; many artists tried to portray his portrait. Someone did it successfully, and some took prominent places in the most famous museums in the world.

This portrait of Marshal Zhukov is the second part of the famous triptych. At first glance, it seems that this is not a real person at all, but a mythical god of war, who descended from Olympus. His coat as a departure from steel, and not sewn by traditional technologies.

Slender Zhukov firmly on its own feet. He leads a great people to victory; he cannot be doubted and hesitates. The author was able to convey in this portrait all the fighting spirit of a man and power. Such persons in history appear only once. His strategic mind led the people to victories, without him events could turn in a completely different direction.

Marshal came out of the very hell of

war, fires burn behind him and fascist planes fall. In the background is the skeleton of a town. On the other hand, behind the leader, there are thousands of young soldiers, they are ready to go to the bitter end. Their homeland will be liberated from enemies.

Zhukov’s chest is decorated with medals and orders, they protect him from bullets and the enemy with invincible armor. On the face we see a gaze looking into the distance. Even at this point, the marshal is thinking up a win-win game of attacking enemy units.

Gray hair and tense smile, give out fatigue, but you can not relax. It is necessary to gird and quickly move on to victory.

This is a strong portrait of a true hero and courageous man. He saw a lot in his path, he had to make serious decisions on which the life of the entire state depended. Vasiliev was able to convey morale and immense patriotism with the help of a brush and paints. It is evident that Zhukov loves his homeland and to win it is necessary to be just that.