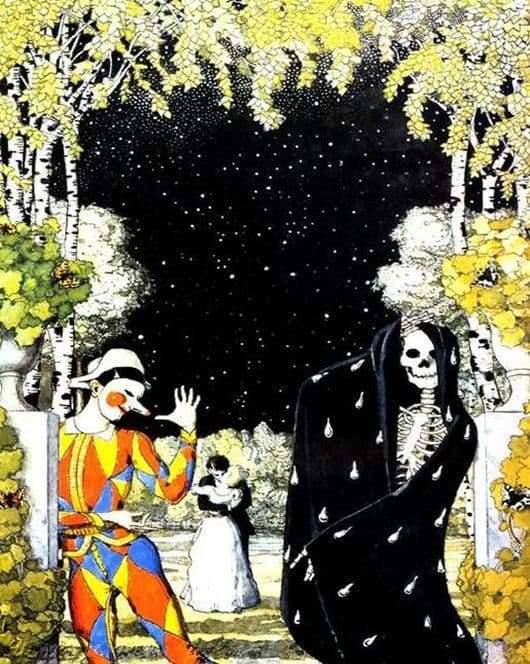 The son of an art historian and the keeper of the Hermitage collections, has absorbed all the subtleties of writing since childhood and formed his own individual style. In his youth he lived in Russia, and later moved to France.

In many of his works, the artist refers to the painting of Watteau, which reflected the tradition of “gallant style”. He writes scenes from ordinary life, such as dating in park areas, holding celebrations, kisses in secluded places, such as gazebos and alleys.

However, all his characters are specific. They are dressed in dresses with bows, luxurious camisoles, and powdered wigs are dressed on their heads. They are no longer on people, but most likely, puppets who play a perpetual fun performance on various subjects, including historical ones.

Borrowing from the Italian comedy effects in the actions of an unexpected invasion and hidden peeping, Somov points the viewer to their sad sarcastic motive rather than to the comic meaning.

All his works unwittingly carry the viewer into the world of memories, sleep and idyll, which is no longer there. Undoubtedly, the artist grieves about her and realizes that it is impossible to return the lost harmony.

According to him, all people are puppets and ghosts who are constantly having fun. They are doomed to a holiday of a lifetime. They are empty inside and do not know how to do anything, how to have fun. Under the clothes and masks hiding sorcery essence and death.

Inspired thoughts do not give him peace, and he embodies them on a strange canvas called “Harlequin and Death.” Here in the center of the picture is a smiling, mocking skeleton, and its twin is Harlequin. Behind love figures, symbolizing love, comedy and tragedy.

The picture shows the flowering of life and the euphoria of love, however, it comes to an end with the advent of death, which has become the sovereign of life, feelings, passion and gallantry.