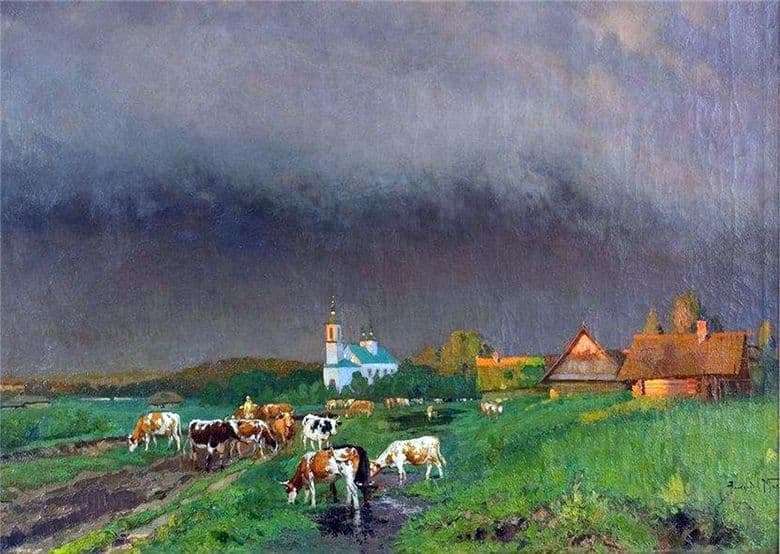 The theme of thunderstorms, pre-storm in Russian painting is presented quite widely. KE Makovsky has, for example, “Children Running from a Thunderstorm”, there are several pictures with a thunderstorm by AK Savrasov, I. I. Shishkin, S. V. Sukhovo-Kobylin also painted a thunderstorm, pre-storm tension of nature waiting for a terrible phenomenon.

So Alexander Makovsky created the painting “Before the Thunderstorm.” The picture is amazing for its depth of space, and at the same time full of details, nature, meaning. It seems typical for the Russian hinterland landscape, settlement. But how much is said by this landscape!

In the right part of the picture there are three village houses – low wooden log houses, almost drowned in tall grass. Behind one of the houses are two trees. Only their crowns are visible, golden. In combination with green grass in the foreground create the August landscape.

the center of the picture, in the depths – the village church, written out clearly, with details, with love. The top of the bell tower is lit by the sun. And even though the church is in the background, it immediately attracts attention. Everything on this canvas is around it.

And if you look deep into the landscape, then just behind the church you can see the pre-autumn forest in the distance: a green massif with somewhere where the crowns of trees begin to turn yellow. From the viewer’s side, their foliage is still lit by the slightly setting rays of the sun, and from the opposite side, the branches of the trees are already waving their foliage in the clouds. Thunder rumbles above them. And the solid wall of water stubbornly moves forward – towards the viewer.

In the foreground, in a meadow, cows are grazing peacefully. They seem not to feel the elements approaching. One even stands in a puddle, but chews the grass without raising his head.

Two three paintings occupy heavy, dark-lead clouds, turning into thick silver-gray clouds. And all this solid mass of cloud clouds hangs over the forest, the church, village log cabins, over the meadow, over the cows. Nature seemed to stop, not breathing, in anticipation of the elements.

The greater the contrast, sharp, glowing – between the church belltower lit by the setting sun, the tops of the rooftops, and the oncoming mass of heavy clouds.