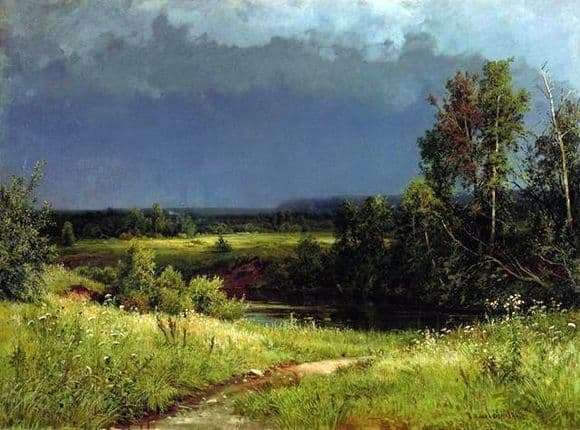 Pastorals and landscapes of Ivan Shishkin are known, perhaps, for the whole world. His painting “Before the Thunderstorm” was written in 1884 and is considered one of the artist’s masterpieces.

On a large canvas, Shishkin managed to convey not just the depicted landscape in the smallest detail, right up to the drawing of individual blades of grass, but the main thing is the atmosphere of nature, to which the merciless elements are about to fall.

The overall rich flavor, the composition perfectly matched to the classic format, as well as the mastery of the drawing – all this makes the picture “Before a Thunderstorm” an example for many generations of landscape painters and makes the viewer long to admire the work in the museum.

At first glance, the picture does not seem to be something outstanding. The landscape of the Russian forest, thick and green, cut by the water surface

of the river, is not much different from other images of similar scenes by artists. But if you look closely, evaluate the picture is not just a passing glance, the beauty and power of the work will open to the viewer. The entire canvas is divided by a clear horizon line – on top of a bright blue saturated sky, on which black clouds curl, and below the green of the forest.

The grass comes to the fore, so detailed that it can be looked at for more than one minute. Shishkin very carefully approaches the image of seemingly minor details.

In the distance, to the river that is breaking through the greenery, a trodden path leaves, which emphasizes a skillful perspective. The horizon is registered with a strip of impenetrable forest, over which thunderclouds are gathering.

The painting “Before a Thunderstorm” fully justifies its name. It seems that everything around us is breathing with stale air, that streams of water are about to flow from the sky, and thunder will thunder. The skill of Shishkin, with whom he conveys this fleeting atmosphere, amazed not only his contemporaries, but still makes the audience admire the masterpiece of the Russian landscape.