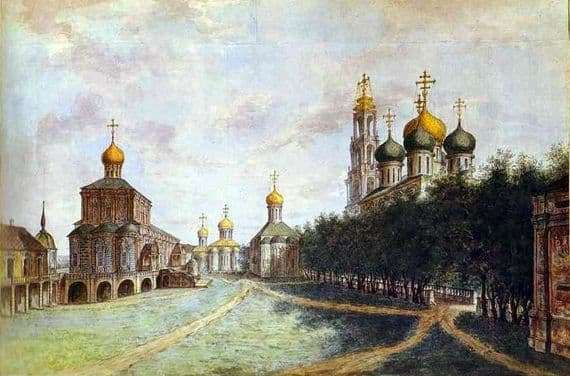 Alekseev – Russian landscape painter, the famous Russian master of the urban landscape, in fact, the first among Russian painters. Prior to this, artists more praised nature. its beauty and completeness – Alekseev imprinted the cities as places that can tell people much more than they know themselves, even more than some portraits. He began with the fact that he wrote the scenery. But over time he became famous, and wrote even on the order of the emperor.

“Trinity-Sergius Lavra” – his work, written for the soul, in his usual attentive, cautious and reverent manner. He seemed to have taken a measure from reality and put it to the picture – he captured one place and on his canvas, it remained unchanged for many years.

The Trinity-Sergius Lavra is a male monastery, the largest in Russia, not subject to the local diocese, but under the personal supervision of the patriarch. For many years he took a lively part in the life of the country – for example, the monks of the monastery opposed the supporters of False Dmitry in the Time of Troubles.

The picture is the same. however, there are no traces of those years. On the contrary, it seems very light – high domes, topped with crosses, white walls, traditional church architecture, a small alley, to which the trodden paths flow. The sky is high as the ceiling of the temple. The golden light of the sun floods the laurel and fills it with a premonition of the good. In this light, the grass in the picture looks like water – it seems that if a monk walked along the path, stumbled, he would have soaked his feet.

When looking at the picture, one feels that the place depicted on it was sacred for the artist. He wrote it out in bright colors, carefully, as if he was afraid of not being able to transfer some spirit to paper, to deprive the place of light, leaving it empty and dead.

But this fear was not justified. The light remained in the picture, and will remain with it forever.